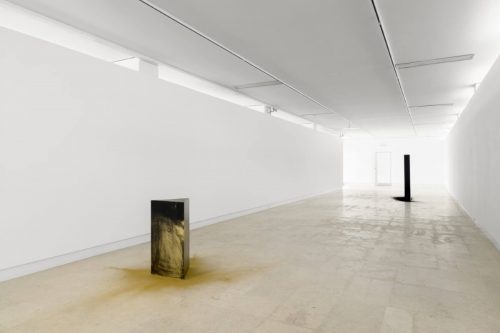 Lisbon City Hall promotes an annual Exchange Programme for Visual Artists between the cities of Lisbon and Budapest, under the auspices of the twinning agreement between the two cities. This programme provides a one-month residency for two Portuguese artists in Budapest. Simultaneously two Hungarian come to Lisbon, for the same duration.

Since 1992, when the twinning agreement was signed, the artistic residence programme has already allowed about 40 young Portuguese artists to develop a project in the city of Budapest and in return has welcomed the same number of Hungarian artists to Lisbon.

This exhibition at Quadrum Gallery is a result of the work developed during the residency in 2014.

There is no direct relationship between the work exhibited by André Romão (Lisbon, 1984) and his Budapest residency. In the Hungarian capital, the artist began working on a text which only took shape, months later, in Antwerp. Selected to participate in a four-month residency at AIR Antwerpen, he placed a sculpture on a plinth in the center of Stadspark that had been empty since 1970. In that year, someone stole or destroyed the statue of the Flemish poet Frans de Cort (1834-1878), leaving the supporting structure in a state of discreet but disturbing solitude.

It is not the first time that André Romão presents empty plinths or statues stripped of authority: at the Kunsthalle Lissabon in 2010, he exhibited a linen-covered plinth entitled ‘O Inverno do nosso Descontentamento’ (The winter of our Discontent). And, in the same exhibition, his toppled statue of the navigator Nicolau Coelho was a reference, this time rather more tactile, to classical sculpture, with a historical and political intention. In understanding the use of these materials and the meanings they generate, it is important to know that the artist has shown a particular interest in the political and cultural history of Europe. Certain chapters or episodes in this narrative function as materials which the artist studies, explores and transforms through the language of art. At the same time, his works allow a discourse to be articulated, which is simultaneously poetic, visual and conceptual, and references art’s relationship with culture and society. The methods and structures used for this purpose are various: a certain rigor derived from minimalism; the demanding freedom of conceptualism; the versatility of moving images.

Three pieces are shown at Galeria Quadrum: the text which the artist wrote in Antwerp and two sculptures in the form of vacant plinths. The written work consists of a meditation on the tensions, the aporias and the violence contained in and projected by the sculpture, and emphasizes an increasingly common element in André Romão’s work: text. ‘For me, it is one of the forms that most resembles my way of thinking, of creating images, of creating a relationship between ideas and “things that already exist in the world”. For the way that I work, images and sculptures are not enough, and neither are words. There are things that don’t belong to words, but there are also things that don’t belong to sculptures. In most cases, they complement each other. They are more like a layer in each work. They allow a greater complexity, a permanent construction and deconstruction of ideas.’ The title of the text, ‘Vibrant Void’, refers to the piece that the artist installed in the place of the disappeared sculpture in Antwerp, while the words evoke the desires, the promises or the materials which, in human history, have played a part in similar gestures or acts.

However, André Romão does not identify historic places or periods. His words have the symbolic indeterminacy of a poem. Could they survive as a text independently of this exhibition? ‘Each work seeks its own method of circulation and I try to make this as effective as possible. It varies from piece to piece. In the sound pieces, for example, the text only exists on site. ‘Vibrant Void’ on the other hand, is a text to be disseminated, to be seen in other contexts, it’s got great scope, it emerged like a poster to be circulated, I have already shown it twice and it has already been published’.

Moving on, we encounter the sculptures entitled ‘Notes on the history of violence’ and ‘The aristocrat’s dancing shadow’: black vertical monochromes of various heights and geometries which someone has spattered with pigment. The effect of this symbolic aggression is pictorial. ‘It is intentional, I wanted them to be deductive objects, which is why I used gold and black pigment. Images are always traps. I wanted them to tread a fine line, a razor blade, for them to be pleasing and violent at the same time. Only that could make them dangerous’.

The marks left by the pigment on the floor and on the works create the illusion of shadows, of patterns. ‘It is a risk you have to take. I really believe that works of art operate on the level of seduction, of desire. It’s only a question of surrender, of engagement, of vulnerability. An embrace can be followed by a stab in the back’. On the subject of ambivalence, André Romão’s sculptures have a peculiar relationship with minimalism. They acquire meaning faced with a body, a human presence, and the potential pictorial illusion they provoke was not an effect rejected by minimalism itself. However they do not assert minimalism’s absolutism of form and austere geometry, nor the unity and neutrality associated with that movement. Instead they suggest a relationship with a cultural and political imaginary; they go beyond the narrative contained in the object. ‘I don’t believe in the autonomy of objects. There is [here] a critical reference to minimalism. An act of assuming the narrative and projective character of objects. In an art work everything is a projection, the materials, the dimensions. They evoke things and refer to events’.

The sculptures mimic the dimensions of the artist’s body. His height, the width of his shoulders, the height of his waist, his arm span. ‘They are bodies in the space, they become actors in a play. A sculpture is a body, I’m interested in knowing how they react to having a fine gold dust thrown at them, and how economic, political and cultural processes can feel like’. Through this investigative impulse, André Romão’s act confronts us with the possibility of aesthetic emancipation and political participation, also inscribing itself, ‘in the history of sculpture, which is the history of the violence of substitution and celebration’.