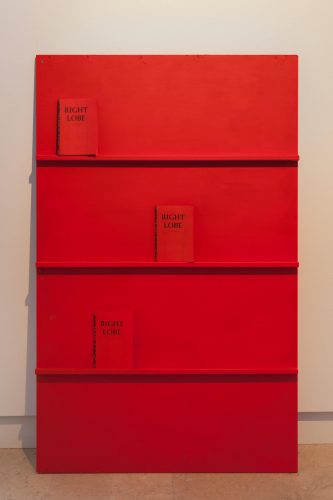 Appropriation, intervention, decontextualization, superimposition. Diogo Evangelista’s work takes shape within these processes, drawing on a multitude of sources, materials and, above all, images. Strongly multidisciplinary in nature, his work reveals a particular interest in images or, to be more precise, in the experience (the reception) and the materiality of images. The connection between these two elements runs through many of his works and acquires an added complexity if we consider the way in which the artist works with the anonymous and disordered repertoire of mass culture (across its most diverse manifestations).

The pieces shown at Quadrum are paintings and moving image works. The paintings belong to a body of work which Diogo Evangelista has been developing and exhibiting. Using magazines and other types of publications, as well as the internet, he searches for and selects photographic images and then subjects them to a series of manipulations. He enlarges them, reprints them, paints them and then sticks them onto canvases. In the series in question, images of plants are overlaid with a monochromatic watercolour wash. The effect is intoxicating and disturbing. It provokes a derealisation of the everyday, imposing a filter on one’s vision. It’s as if these images could not be seen in any other way.

It is important to underline the importance of the book ‘Right Lobe (working script)’, produced during the artist’s Budapest residency in the summer of 2012. ‘It is a script/diary which has been the basis for my most recent works. A basis in which concepts and images overlap. A book of collages, consisting of four core components: excerpts from the ‘Psychedelics Encyclopedia’ by Peter Stafford, images of groups of nudists exercising (with no apparent origin or date), Moroccan boucherouite rugs and Van Gogh drawings produced around 1890. When you read it, your first impression is that these are accounts of dreams. Later you realise that they are hallucinations’.

In moving from the book to the exhibition, Diogo Evangelista pursues the transformative action of art, collaging images, evoking different places, practices and times. He questions the viewer mentally as well as visually. He wants to involve and confuse our senses, attack our perception. This is what happens with the slow morphing in the video ‘Sungazing’, for example. At first, it is unclear whether the image actually moves, if we remain still, or if someone has placed us under a strange spell. The artist states: ‘I want to evoke different states of perception, a connection with the unconscious, with different levels of consciousness, different approaches to reality, parallel worlds’.

‘Sungazing’ begins with a strange monochromatic surface which soon reveals an image of the sun seen from the earth. It is a rapid sequence that is followed by images of colourful rugs, with various patterns, which slide down the screen. The artist’s interest in these items is not a chance one: ‘At the beginning of 2013 I went to Morocco to look for a rug and I ended up finding another one that caught my attention. It is just a rug for domestic use, but I became fascinated by the patterns, by the free forms, by the freedom represented by these patterns’. Accompanied by the sound of the journeys made by the Voyager probe in the 1980s, ‘Sungazing’ resembles a voyage, but one within an arti-ficially created space, in which the viewer becomes detached from his or her body and memories, and from the exhibition context.

The title of the piece refers to a situation which we could describe as analogous: ‘It refers to a therapy, supposedly from ancient Egypt, which consists of staring at the sun until the energy and nutrients needed for survival have been absorbed. It could also be associated with prolonged gazing at the sun or even with blindness. As a method of hypnotism. As a source of energy and light, a fundamental element in the process of vision’. The video ends with the light of the sun obliterating the forms and designs of the rugs while the low sounds of the space voyages disappear, silenced by percussive rhythms. It is an immersive experience which leaves the viewer dazed, not only by the effect of the sound and almost imperceptible movement of the rugs, but also by the ambiguous nature of the images themselves. Diogo Evangelista states that they may be ‘close-ups of leaves or skin, aerial views of cultivated land’. We might also see them as reproductions of abstract paintings or frames from an animated film. A journey between dimensions or scales which coexist on the same surface, the video creates a psychedelic experience which places the viewer in a trance, in an altered state of sensory perception.

Less immersive, ‘An argument against anti-realism’ shows superimposed images of plants and leaves that are not static. They tremble and vibrate, creating mysterious transparencies, fantastic beings in a pink forest. There is no point in ascribing form or meaning to these images: that is not the intention. A female voice reads phrases and words taken from ‘Right Lobe (working script)’ which allude to the alteration of states of perception, of sensibility and knowledge, to extraordinary and unreal situations and experiences. They are not intended to illustrate the images, yet in the softly didactic tone of the speaker, they emphasise what those images suggest: the unbounded and seductive imagination of art. 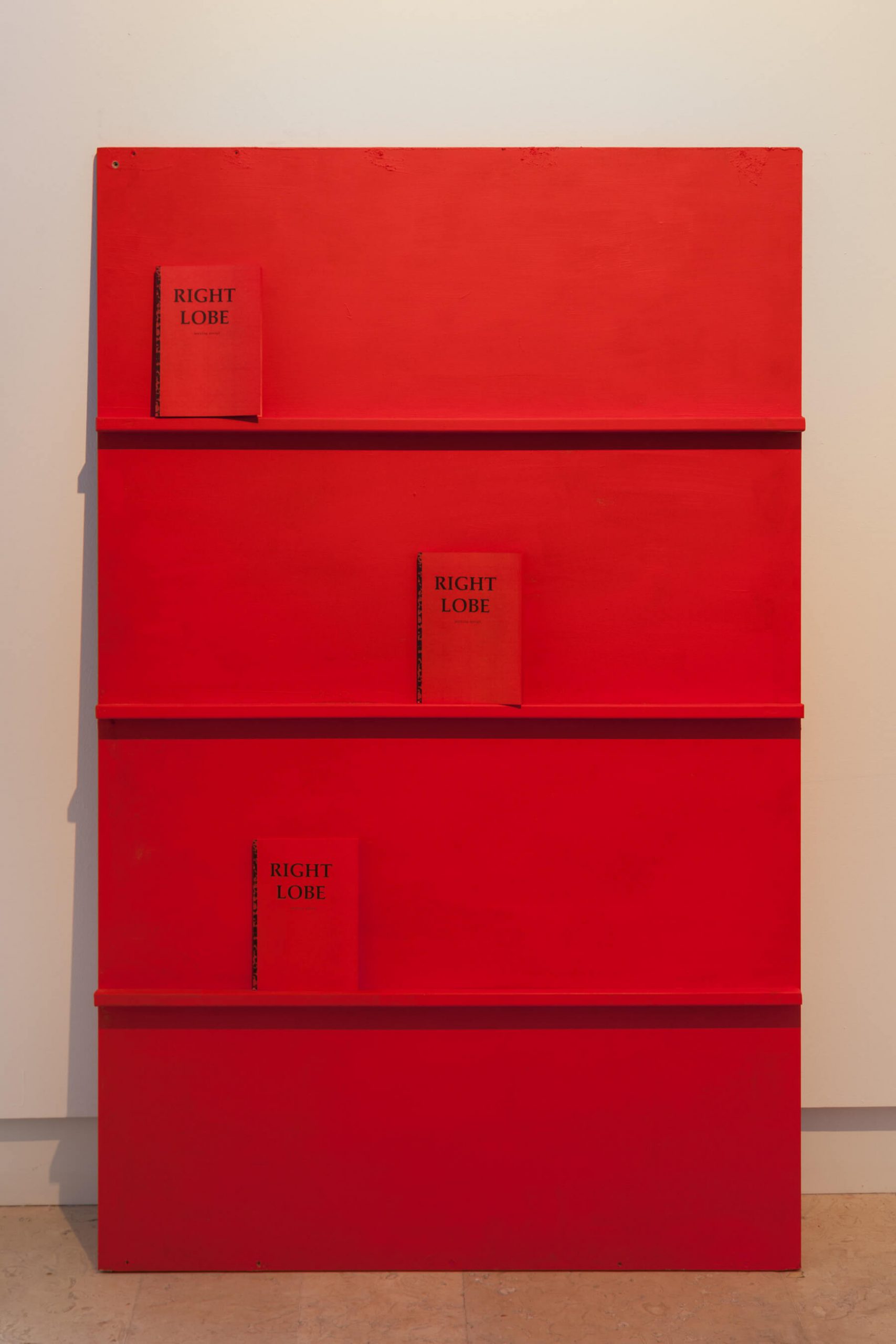 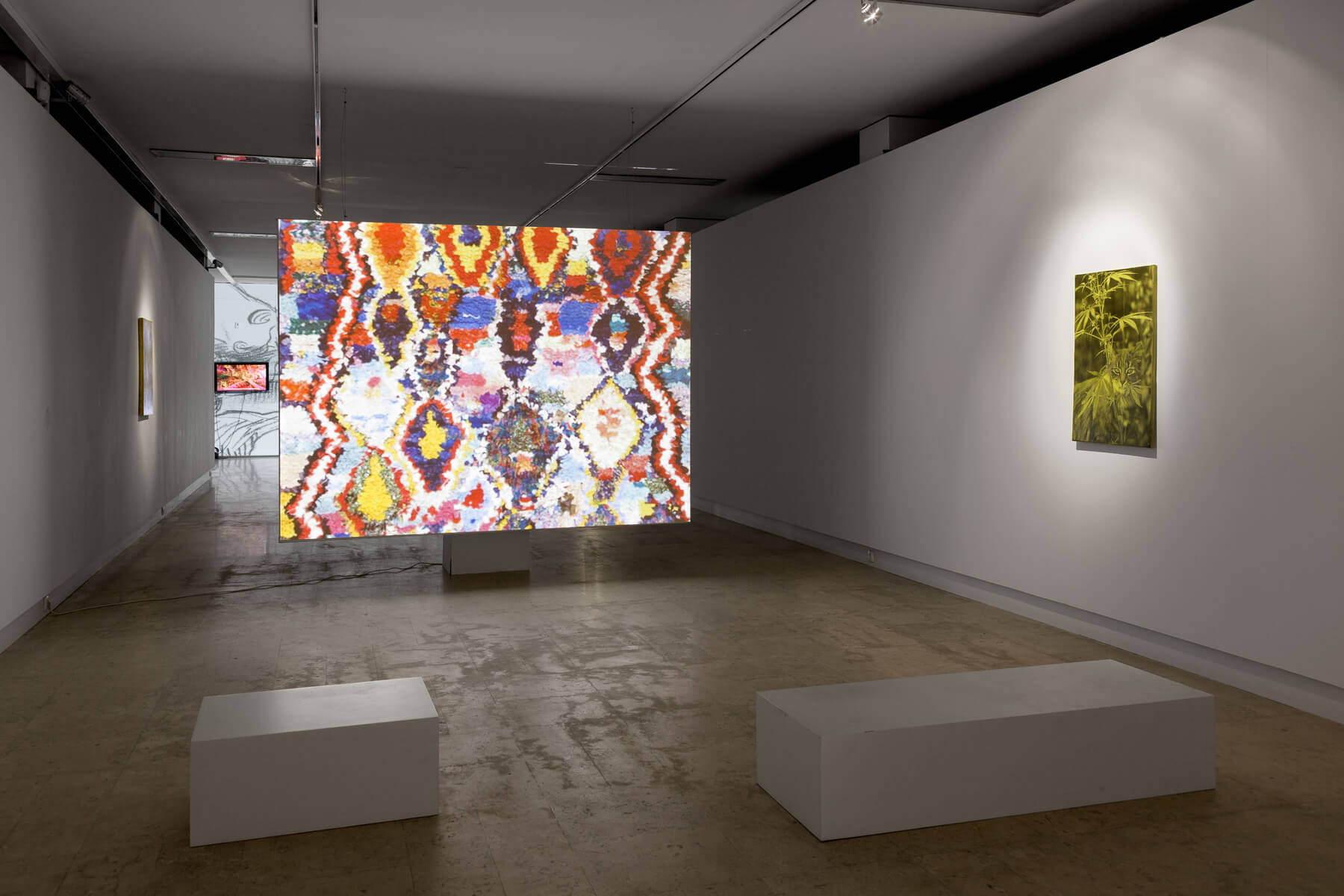 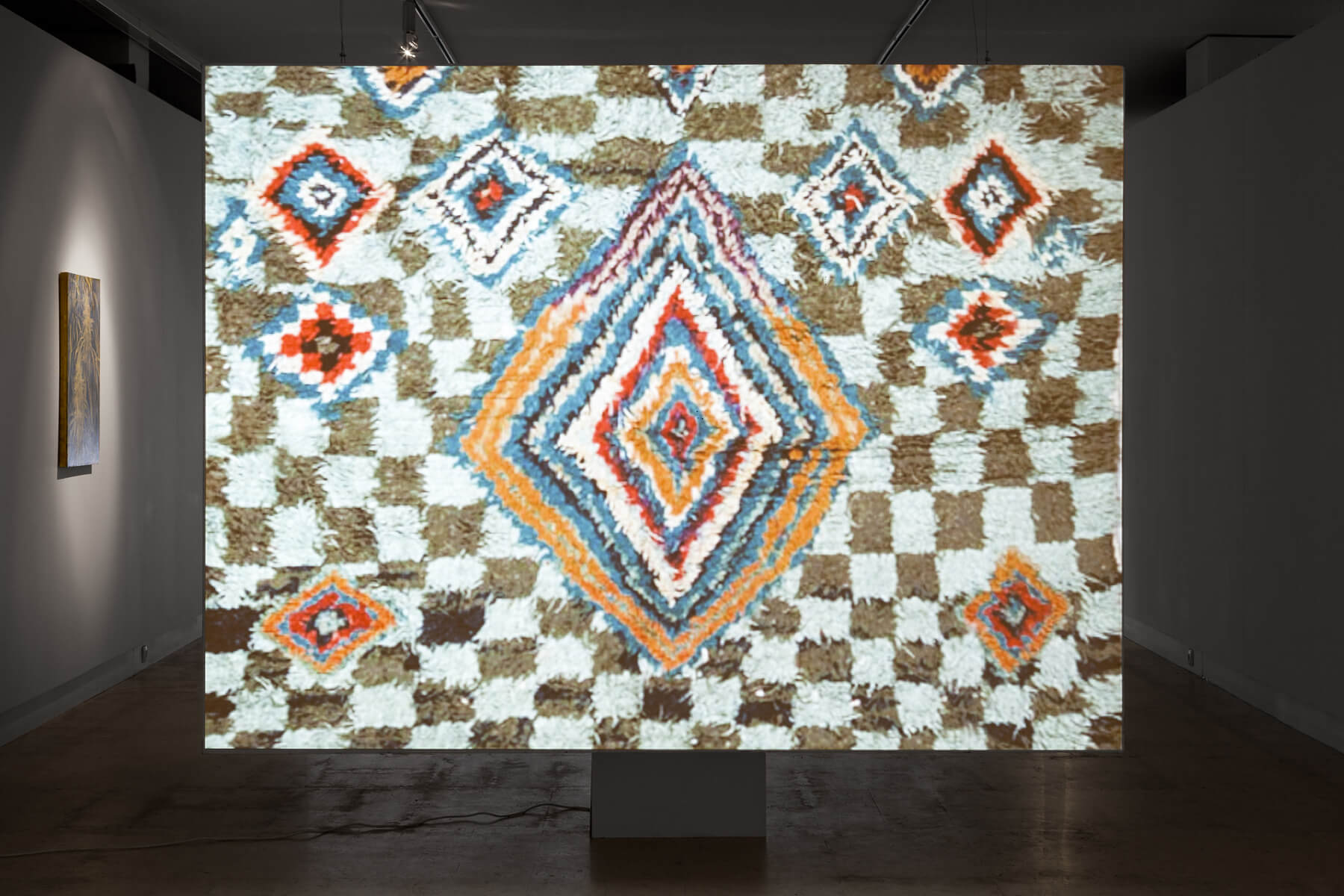 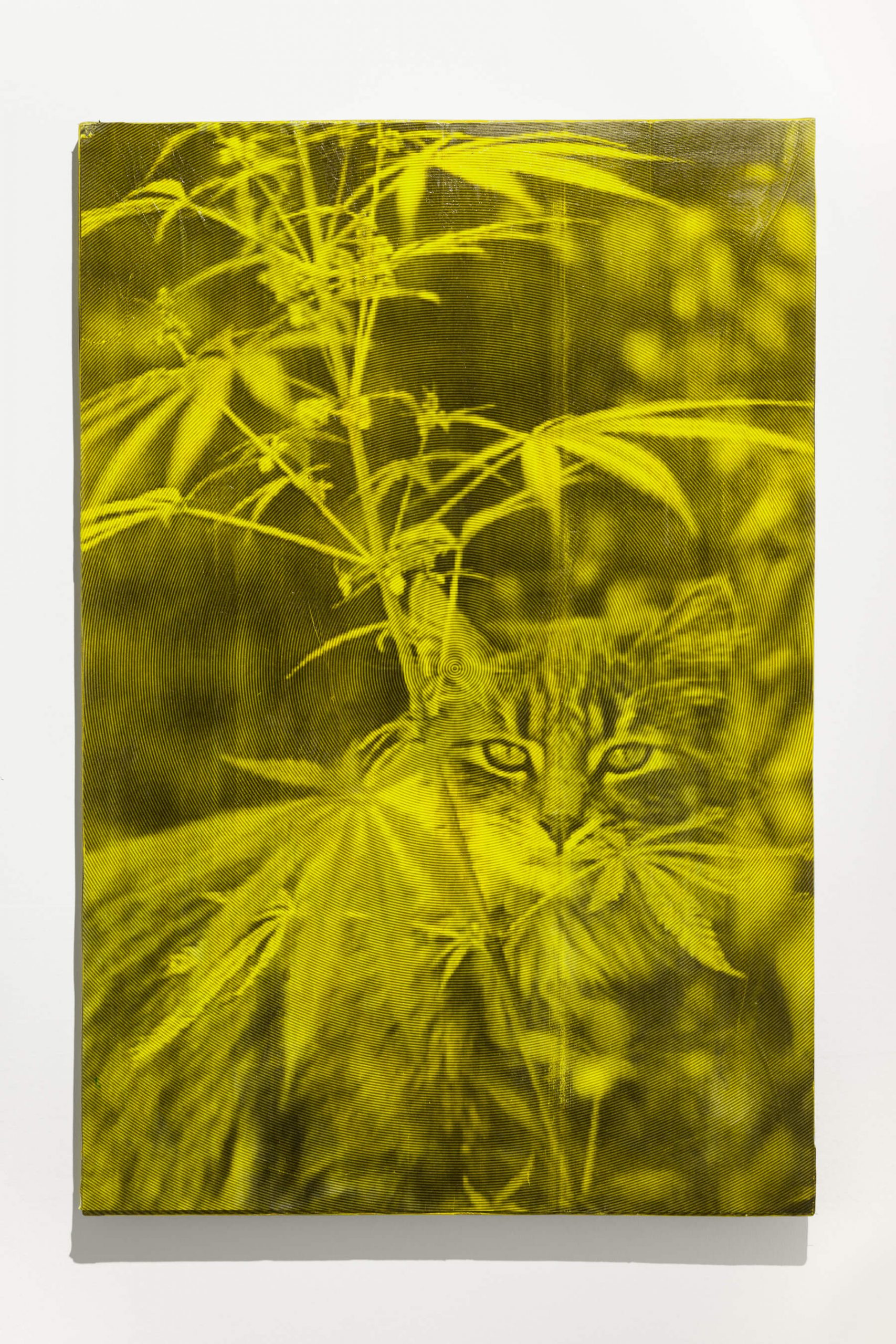 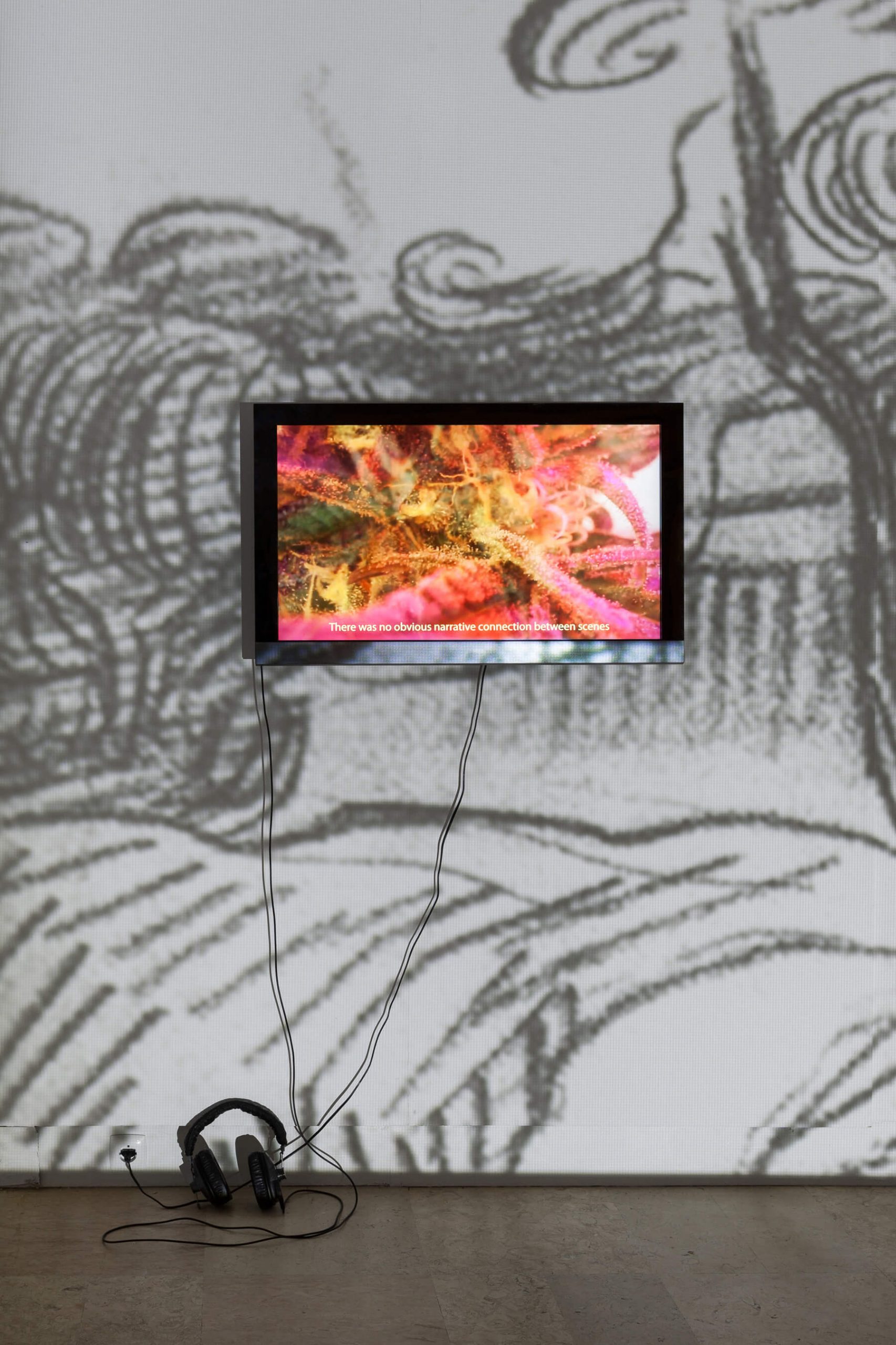