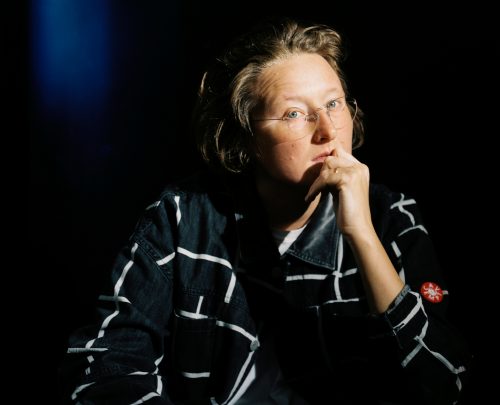 Qualified by The Guardian as “the most thrilling new voice in British electronic music,” Beatrice Dillon released her debut LP “Workaround” on the PAN label in 2020, receiving unequivocal critical acclaim by today’s leading musical references, thus realizing all the power and aesthetic sophistication that was intuited in her path thus far. A graduate of Chelsea College of Arts, she has affirmed herself as a DJ, and is a resident at NTS Radio, performed in festivals and events such as MUTEK Montreal, Dekmantel, Documenta Athens, Cairo Masåfåt, Moscow Save, Barbican Centre, among others. Dillon engaged in multiple collaborations with award-winning visual artists across disciplines, work processes and media, with presentations and performances in spaces such as Lisson Gallery, ICA, TATE, Wysing Arts Centre, Centre d’Art Contemporain Genève, Palais de Tokyo, MONA Tasmania.
In this performance, originally scheduled for last year’s edition and postponed due to the pandemic, she will perform in collaboration with percussionist Kuljit Bhamra, a British tabla master and composer as well as a pioneer of Bhangra, a popular musical style of the Punjabi diaspora in the UK. His nimble finger percussion interweaves telepathically with Dillon’s complex rhythmic structures, and the concert will include the recently debuted Tabla Touch®, a new instrument designed by Bhamra and his team at Keda Music Ltd.