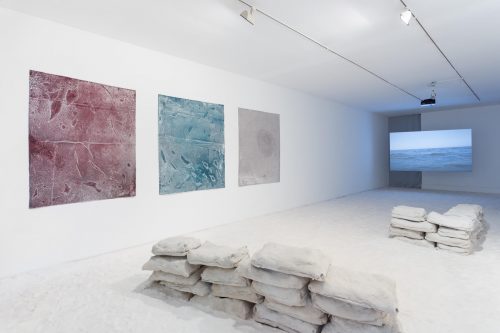 As well as a song by Chet Baker – which Maria Trabulo listened to on a loop towards the end of 2016, while she experimented in her studio in Vienna, with the possibilities of painting with seawater on fabric – Almost Blue, ‘Quase Azul’ or ‘Fast Blau’, was also a recurrent response among different people questioned by the artist about the colour of the sea.

In the words of the artist, ‘Almost Blue’ unfolds around the possibility of defining the colour of the sea, not necessarily looking for a definitive conclusion but exclaiming precisely the differences and contradictions which prevent a universal consensus.

Going beyond blue is asking respondents to define the sea by more than its formal appearance, in an effort to comprehend each of their personal experiences with the sea or the ocean, and thus, the political and social issues and events of world history and geopolitics today. Maria Trabulo’s action, or starting point, is situated, therefore, in coastal areas, where there are – in the weaknesses of established limits – points of departure and arrival and political and social frictions. These areas of contact and friction are used by the artist as a device to create new ways of seeing and thinking about the relationships between people and between people and territory.

‘Almost blue’ features various sculptural works, almost all of them being shown for the first time, the result of extensive research carried out by Maria Trabulo since 2014. The artist focuses on the possibility of defining the sea on the basis of a range of political contexts, such as the tragic migrations in the Mediterranean, the financial crisis in the countries of southern Europe in recent years, and the more recent struggles of activists around environmental issues relating to oil exploration in Portuguese maritime territory, namely in the area around Aljezur.

ALMOST BLUE: notes about the project written by Maria Trabulo, 2018

The ancient Greeks did not have a word to refer to the colour blue, which is why Homer referred to the colour of the Mediterranean and Aegean seas as wine-dark or wine-face (oinops pontos). Homer’s cultural and linguistic past and personal experience with the sea influenced him in his choice of words to define the colour of the sea. ‘Almost blue’ stems from this presumption to trace the significance of the sea in a collective memory, through the collection of personal stories in coastal areas.

‘Almost Blue’ begins with The Walk is easy with the feet on the Ground, a work in journal format that I published in 2014 with images that I collected from webcams belonging to resorts situated in parts of the Mediterranean (Greece, Italy, the South of France, Southern Spain) with a big migration flow from North Africa. At the time, I was living between Austria and Germany, and I was particularly curious about the webcams of his region. The migratory situation was not at all a front-page issue; nobody talked about it. In contrast with this situation, I lived in Europe, supposedly on the other shore.

The objective of the various webcams was to allow hotel and resort guests to see what conditions were like on sea and on the beach. The film planes always showed a view of the horizon, but as well as monitoring the atmospheric conditions and state of the sea, the cameras also seemed to be used to forewarn the arrival of boats of refugees. There have been several cases of vessels sinking very near the coast, leaving their occupants to swim to shore to arrive at beaches full of European tourists.

I had never been to the Mediterranean, nor had I ever seen that sea before. I was attracted to the landscape and the shooting angles that the webcams defined and transmitted. The colour of the sea varied from camera to camera, so it became difficult to make out its exact colour: almost blue, or a mixture of blue and green, different to the colour of the North Atlantic that I knew so well.

One year after the publication of The Walk is easy with the feet on the ground I went to Calabria, a region in southern Italy, for an artist residency. I met Maristella, a social worker who worked in the Speranza centre, an organisation which takes in young refugees from North and Sub-Saharan Africa. When she found out about my work, Maristella asked me to interact with the youths in the centre, thinking that this could help them deal with the situation in which they found themselves, and with the trauma suffered by the crossing of the Mediterranean.

I was concerned to find a way of approaching them and talking to them about each of their most memorable or happy life experiences, without my presence becoming invasive or uncomfortable. I introduced myself as Maria, an artist from Portugal. I explained to each of them, individually, about my work as an artist and I spoke to them about the publication I had made in 2014, telling them how, at the time, when watching those webcam images, I had thought of young people like them, and their crossing of that sea to arrive on Europe’s shores. These initial conversations led us to attempt to define the colour of the sea, which had been so intriguing to me. Out of this came conversations and stories, moderated and made possible by Maristella, who helped as a translator and intermediary, via email, Skype, telephone and letters. Those young adolescents described, from their personal perspective, the colour of the sea that had taken them there. They came up with a wide range of definitions such as: the colour of moonlight, the colour of a big fish, the colour of an enormous black wave that had almost capsized the boat, or, even, by distinction, that in Libya it is black and in Italy blue, a reference perhaps to the beginning of the crossing at night time and the arrival to the European coast in daytime. Daylight facilitates rescues in cases of SOS.

Asking about the colour of the sea became a way to unblock conversations in unknown situations, allowing for the beginning of a connection and understanding – sometimes fleeting, sometimes lasting – with those living in coastal areas, who often experience social or political tension. This action was extended to other places like Crete, where the colour of the sea assumed the chromatic spectrum of the economic crisis, and Portugal, where it acquired the colour of resistance.

During summer 2018, as an extension of the original project, having contacted several participants involved in environmental issues, Maria Trabulo moved to Aljezur, 25 nautical miles offshore Arrifana beach, to be precise, to carry out 360º filming of the envisaged location for the installation of an offshore oil rig (the Aljezur oil well), currently the object of a dispute between citizens, the Portuguese government and oil companies:

‘As well as the environmental issue, what motivated me above all to extend the project to the south of Portugal, was the way in which fossil fuel and mineral exploration, particularly in that region, jeopardised the democratic rights and principles of the citizens.

In Aljezur, the expression ‘put up a fight’ sounds different. The words war, battle, front, fight, suffer, stand up, not give up and bring down resonated in the conversations and meetings held between activists, environmentalists and politicians. There, next to Sagres point, the battle or resistance is thought out. I was told that there are days when the wind is so strong that it can lift fine particles of salt from the water and sand which are then spread throughout the region, covering houses, cars and crops in white dust.’ 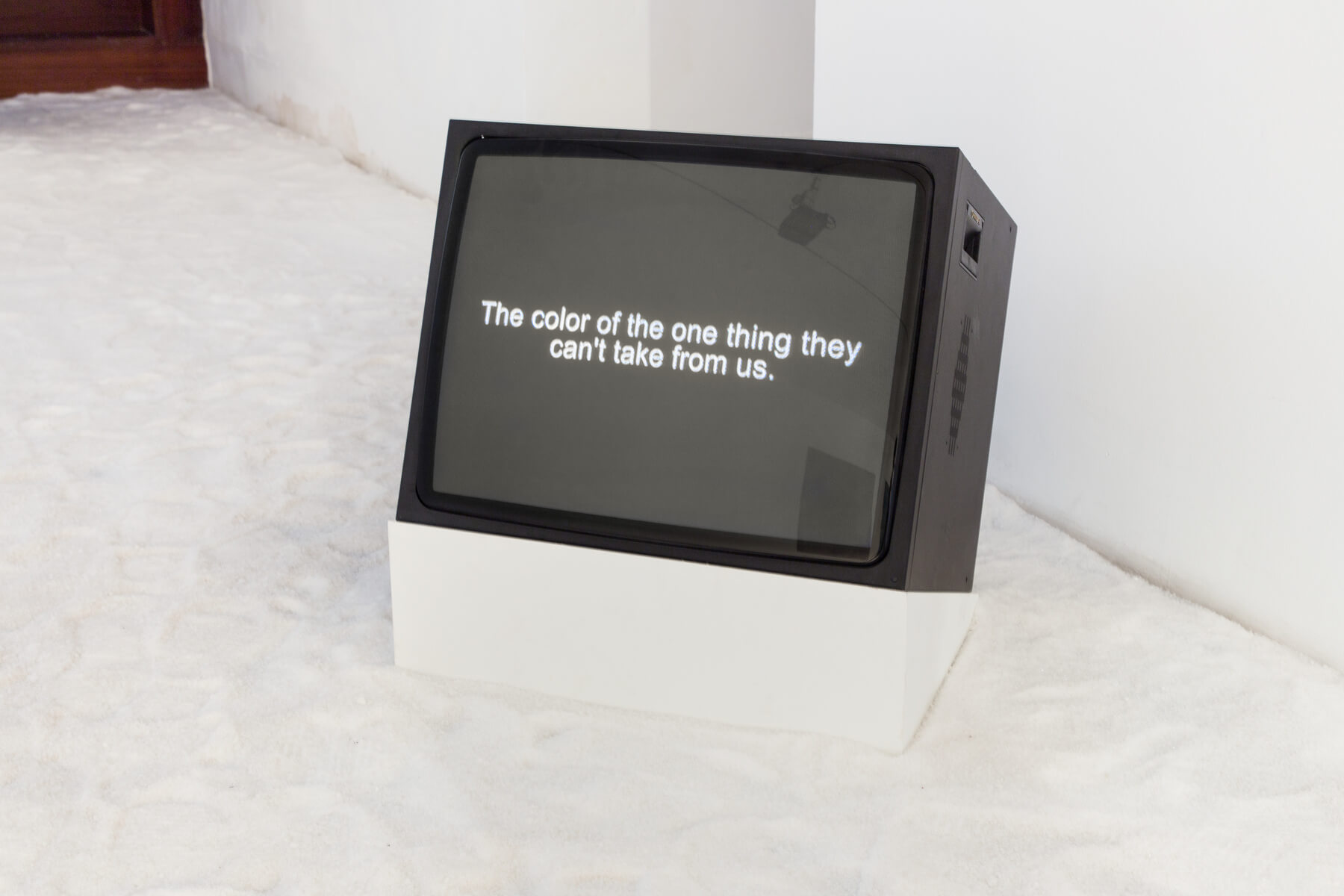 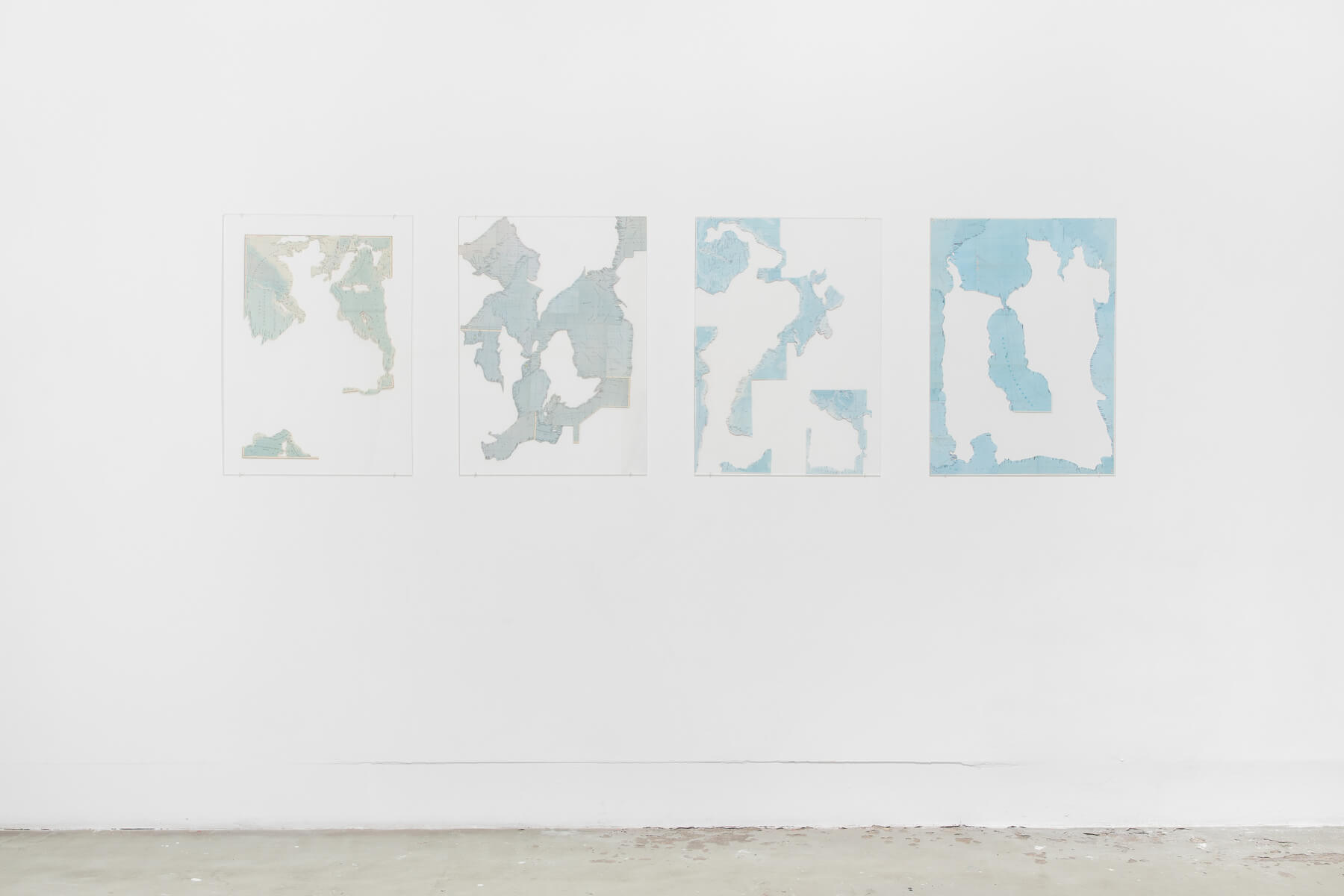 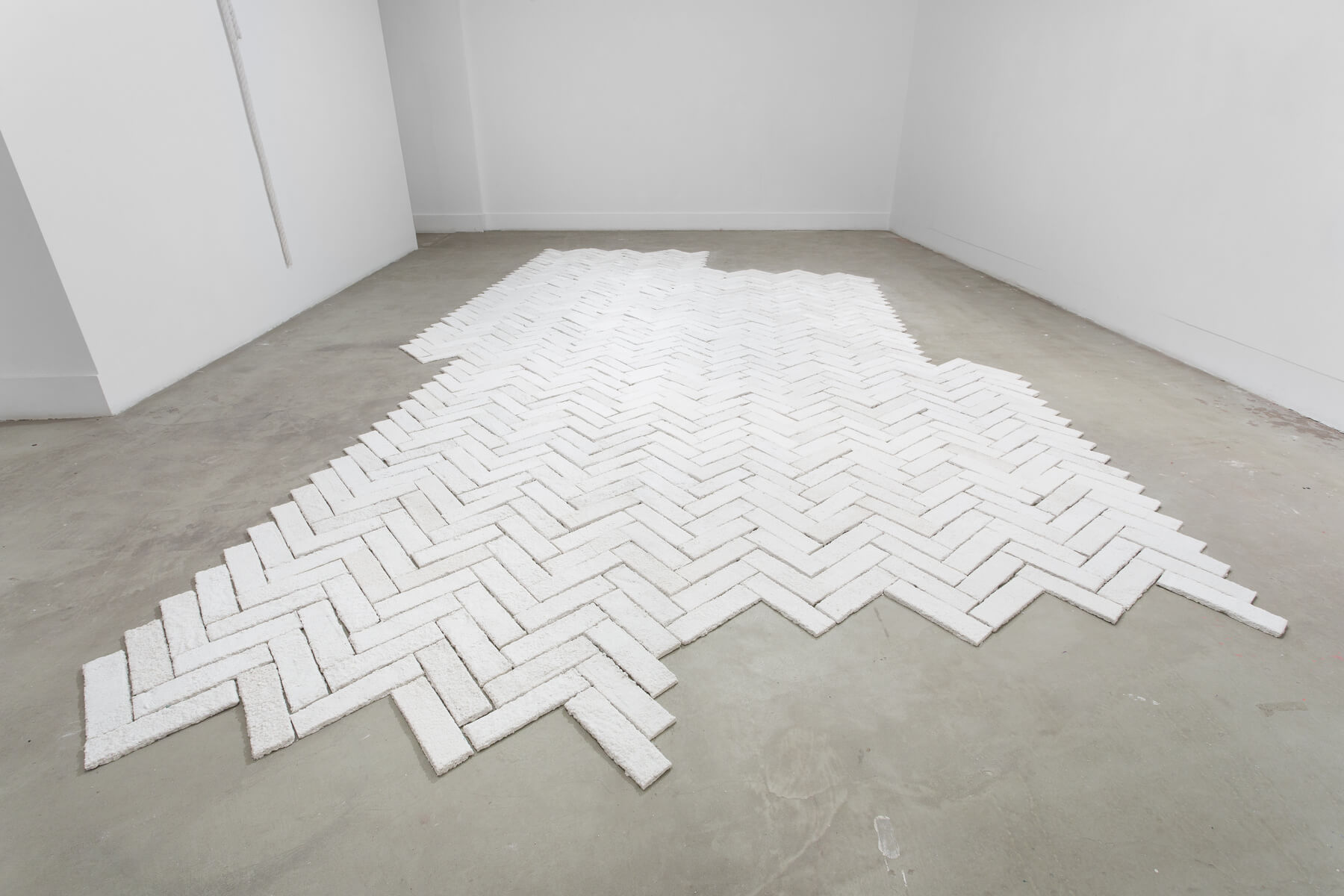 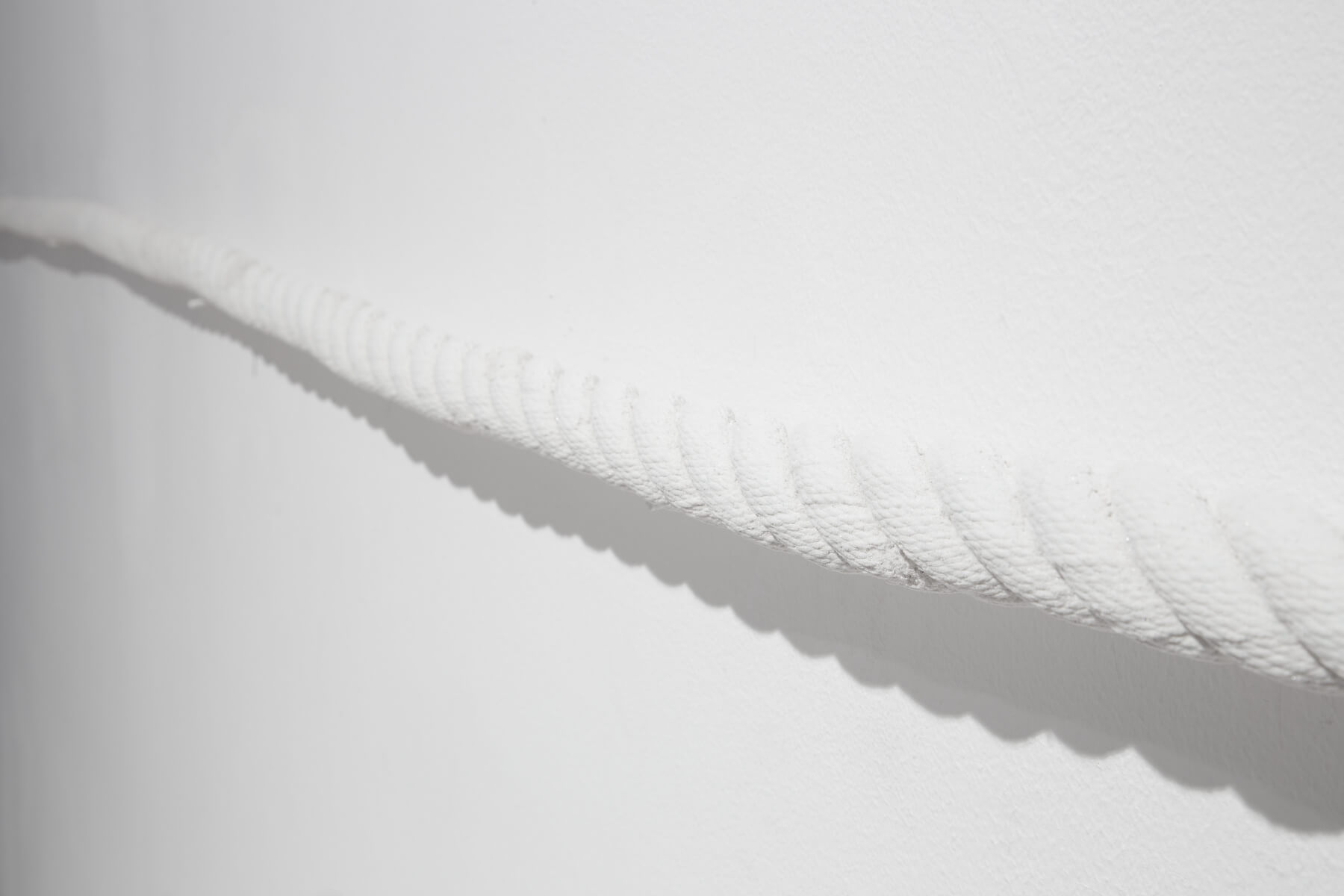 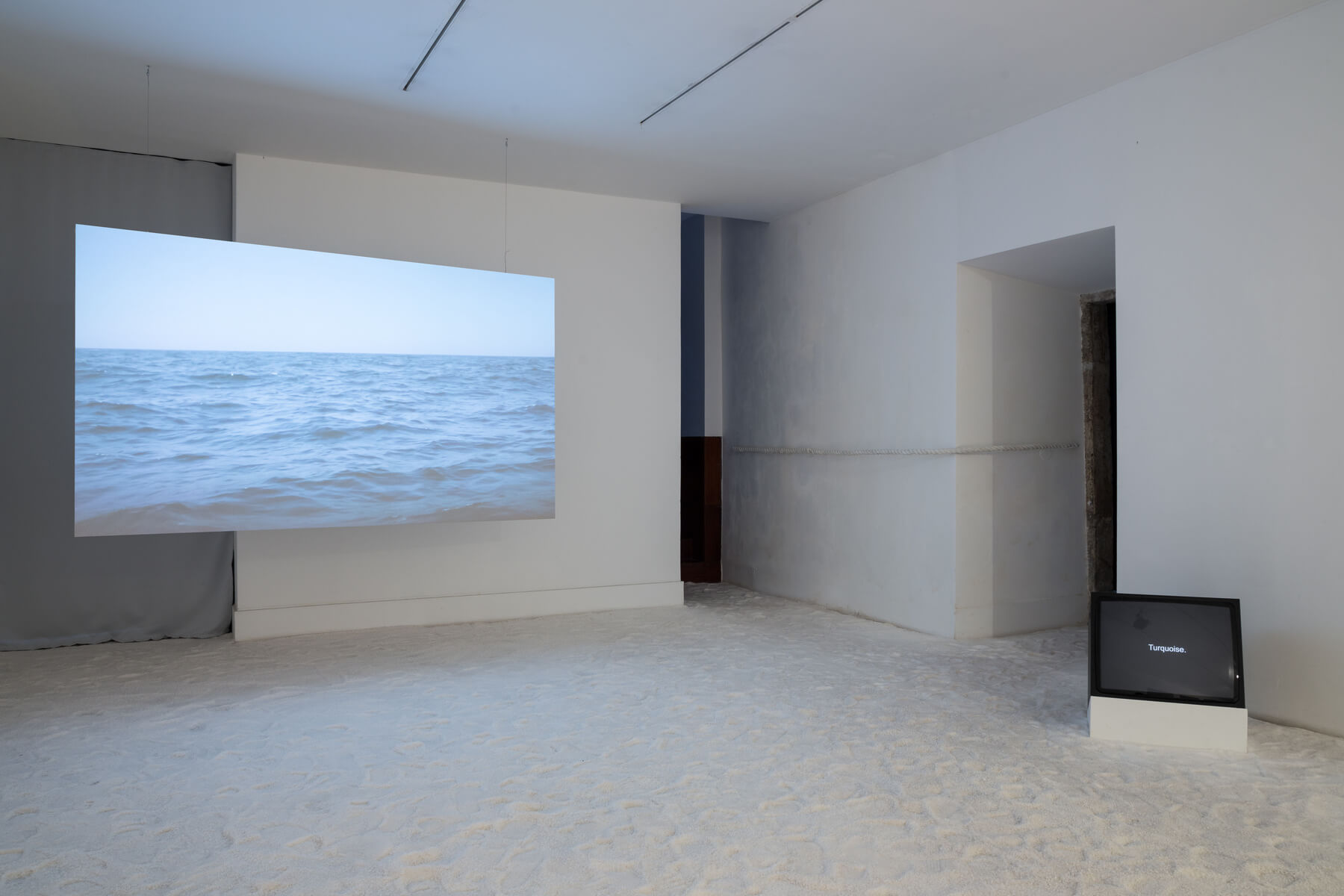 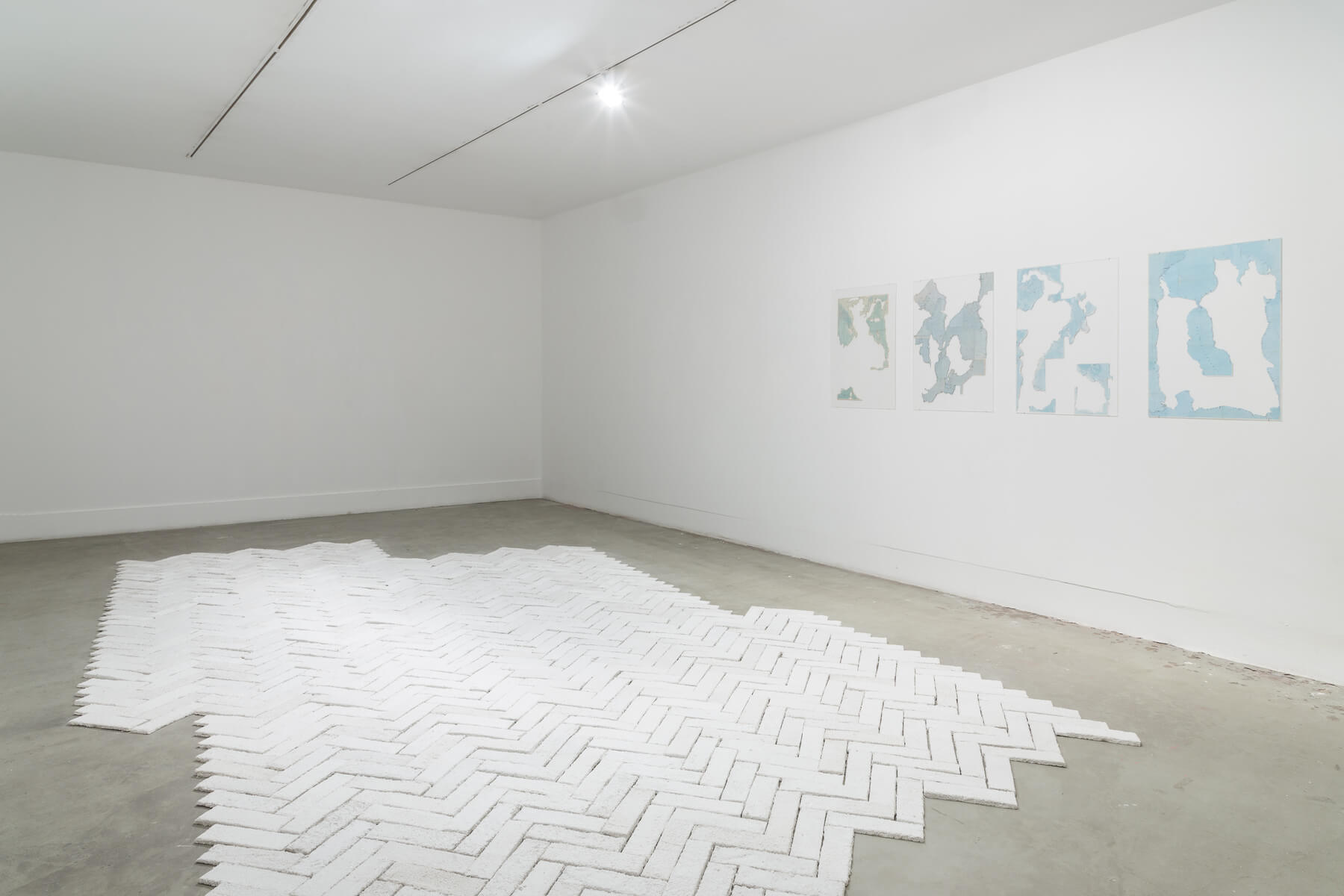 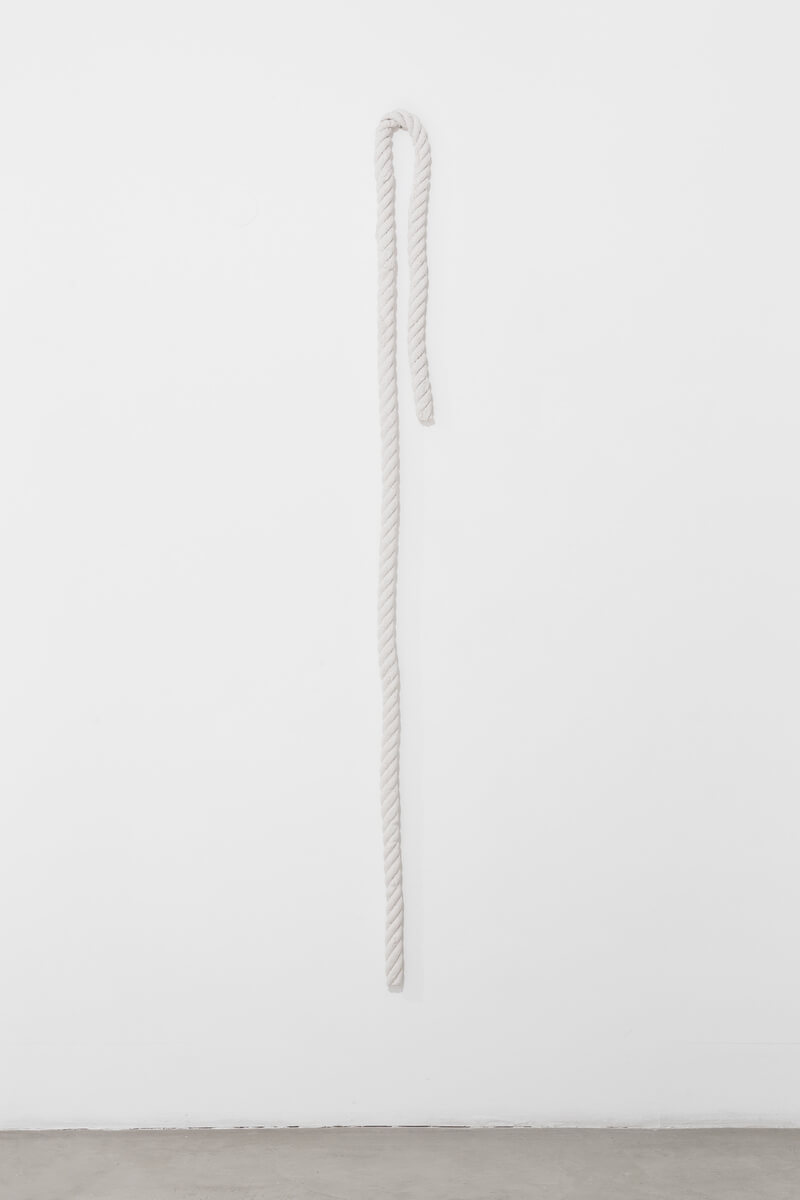 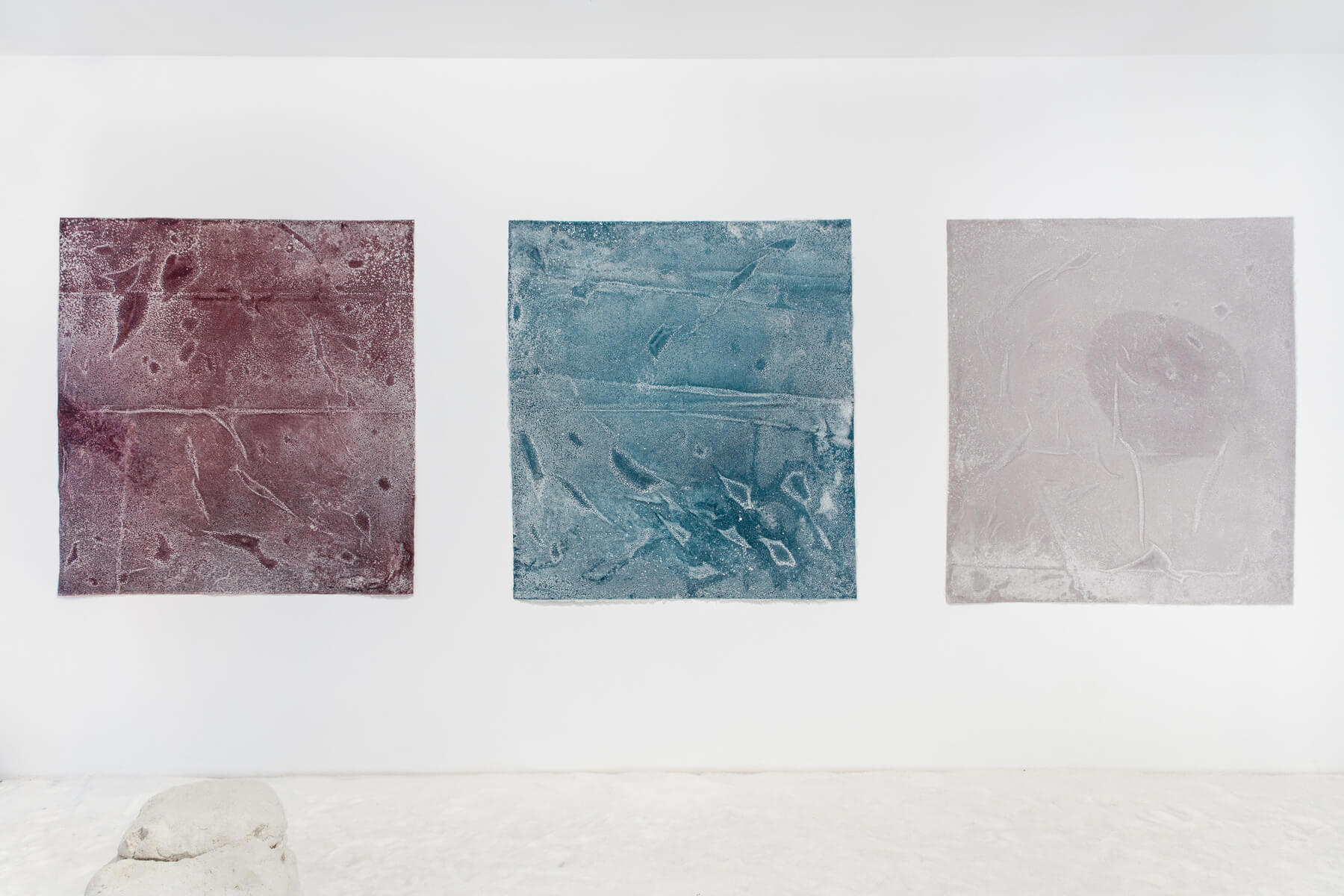