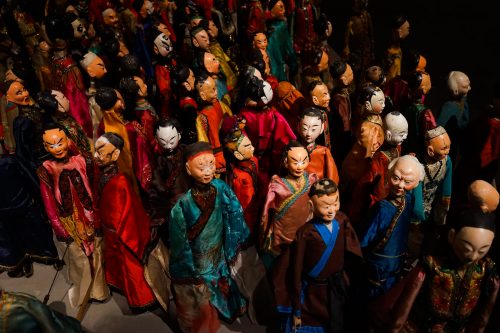 To celebrate the 15th anniversary of the Museu da Marioneta, we invited four visual artists, António Viana, Francisco Tropa, Jorge Queiroz and Susanne Themlitz, to work with pieces from the Museum’s collection with which they could establish affinities.

The only requirement was that the artists would work within the four major collection groups of the museum, namely: shadows, masks, puppets and Portuguese puppets, in particular.

The result is explored in a scenography where the puppets assume a new function, interacting with the works of each of the invited artists, in nuclei whose degree of proximity to the theatrical universe is diverse, but where the puppets continue to affirm themselves as a cultural reference, while portraying the long history and different geographies of puppet theatre.

This exhibition is a result of a partnership between Museu da Marioneta and Galerias Municipais de Lisboa.

THE GULIVER IS COMING…

The recent past of Portuguese puppet theatre is honoured by António Viana. The popular puppeteers – who travelled the country fairgrounds until the 1960s – are represented here by the puppets of Manuel Rosado, arranged in a procession staged by Rosado himself, but also in the guardhouse (a structure of wood and fabric that served to present the Roberto theatre, a Portuguese style of puppet theatre).

Still on the traditional side, we find the Dolls of Saint Aleixo, kindly donated by CENDREV which, in Évora, keeps this tradition alive.

The introduction of contemporary puppet theatre in Portugal was made by the company of São Lourenço. At the beginning of the 1970s the company recovered texts by Gil Vicente and António José da Silva for opera, featuring puppets alongside the puppet masters themself. Helena Vaz, José Alberto Gil and Fernando Serafim were the founders of this group, also responsible for the creation of the first museum dedicated to puppetry in Lisbon.

Finally, Ildeberto Gama’s works belong to the cast of Guerras de Alecrim e Manjerona, by António José da Silva, which was brought onto stage at the Teatro Nacional D. Maria II in 2006, and for which the actors performed alongside the puppets.

The story of Cinderella in Robert Walser’s version is at the root of Francisco Tropa’s work, who used shadow puppets from China and Indonesia (Bali and Java) to produce his film.

In traditional shadow theatre, the silhouettes are moving behind a canvas, lit by an oil lamp. In Indonesia, the puppet master is called dalang and plays an essential role in the show: he is at the same time actor, director and conductor. While moving the characters, he recites the text and directs the gamelan (instrument and orchestra composed of gongs and bowls), which gives rhythm to the whole story.

The figures are cut into animal skin and painted with natural pigments. In the case of Chinese puppets, the heads can stand out from the bodies and it is them who indicate the character.

But the differences are found mainly in the repertoire of the shows: while in China the shows are based on operas or traditional tales, in Indonesia the repertoire focuses on the epic poems Ramayana or Mahabharata, and religious or moral themes are also introduced.

Excellent carriers for stories and the oral transmission of habits and customs, shadow puppets are considered predecessors of cinema, because like in cinema the image is being projected onto the screen by rays of light.

The work of Jorge Queiroz consists of a set of paintings installed in the shape of a screen between two Nô masks from Japan.

It is the main actor – shite – who wears the masks of the various characters: men or women, warriors or gods, demons or animals. His performance skills obey precise rules of recitation, dance, mimicry and music, all of which are described in the Nô texts.

The masks indicate the presence of gods and are honoured in rituals before being worn. The frozen expression they manifest is apparent: in fact, their construction obeys precise norms that ensure, depending on the lighting and perspective of the observer, the mask can transmit different emotions. Through its slow, precise and subtle movements, the actor’s function is precisely to help the audience to decode the sensation that the mask intends to transmit at each moment, according to the text he or she is staging.

In the absence of the actor, it is up to the visitor to read the masks and all the drawings, while moving through the gallery.

China has a long tradition of puppet theatre, which begins with shadow theatre but extends to other types of mastery such as glove or rod puppetry. The set of around 121 Chinese stick puppets, chosen by Susanne Themlitz for this exhibition, are drawn exclusively from the city of Chaozhou, in the Province of Canton, and it is difficult to find such a representative group as this.

Originating in the late 19th or early 20th century, these puppets are believed to have evolved from shadow puppets, a theory quite plausible given the similarities between them. Both have heads that are not fixed to the bodies, allowing several characters to use the same base. Also, the place where the sticks are placed is identical: one on the back and two on the hands. In the case of Chaozhou’s puppets, the sticks are removable, and for this exhibition they have been removed.

The relationship between these puppets and Chinese opera is obvious: in fact, the characters are the same and the shows bear similarities. In this group one can detect the diversity of figures, which differ according to the mask they wear. 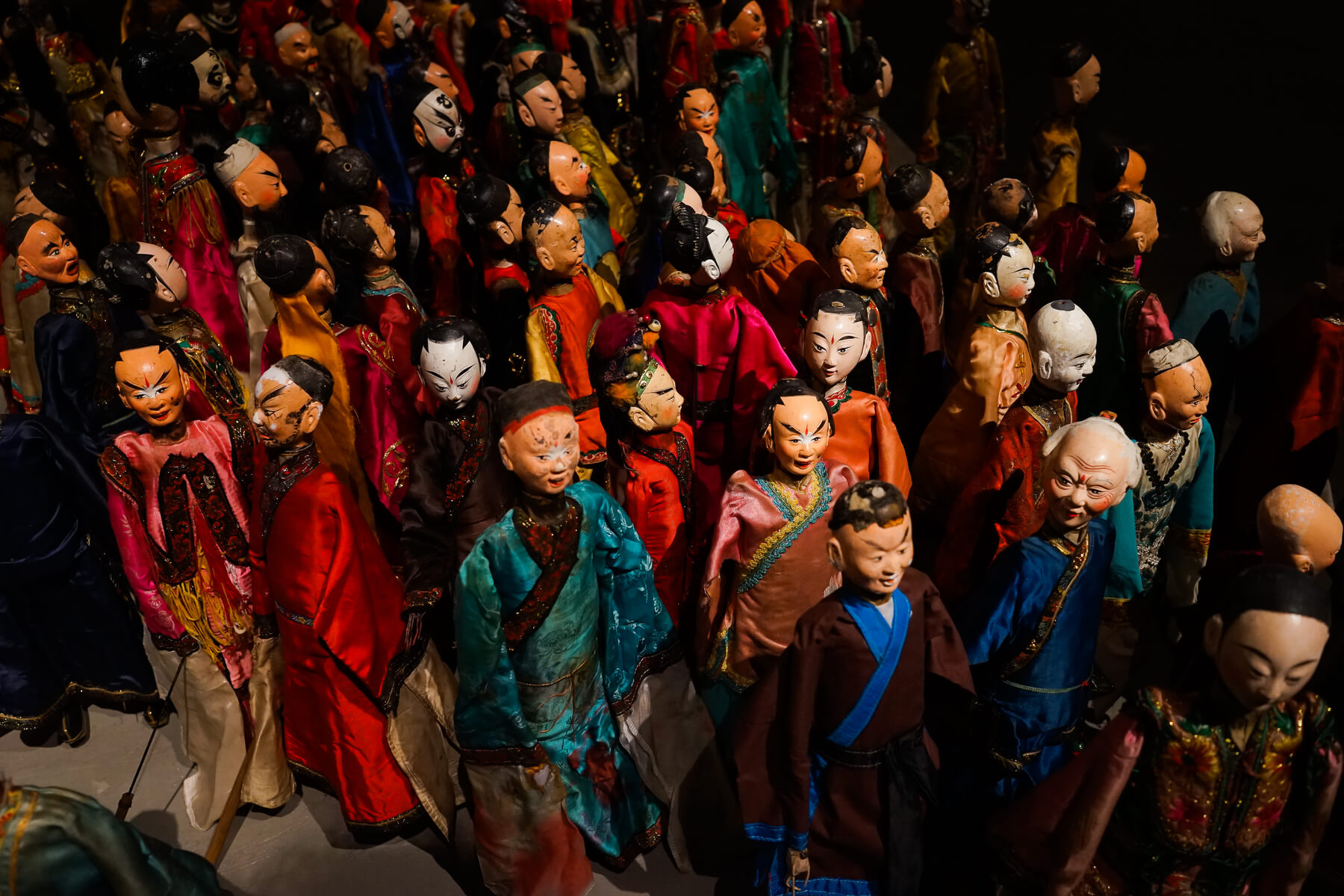 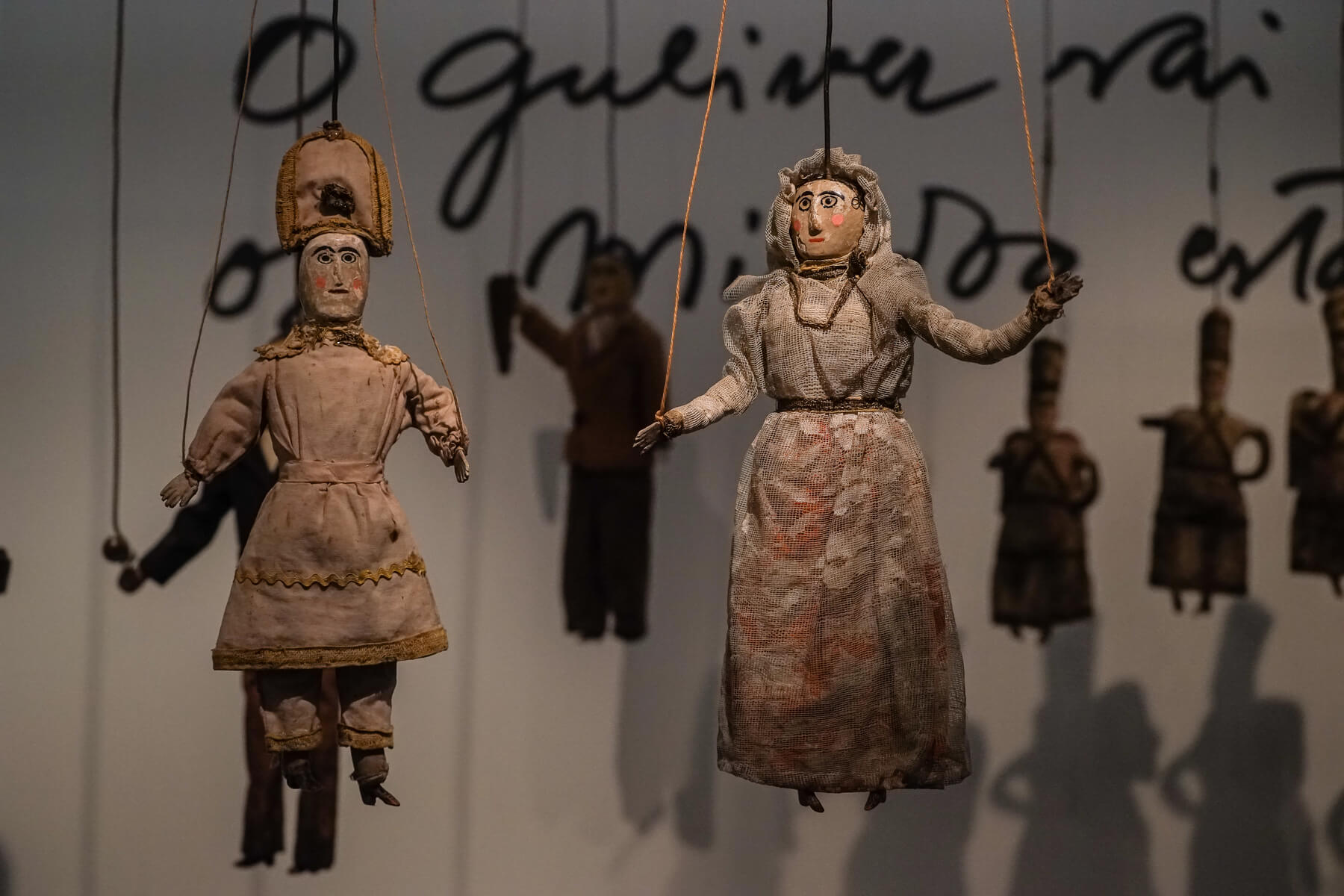 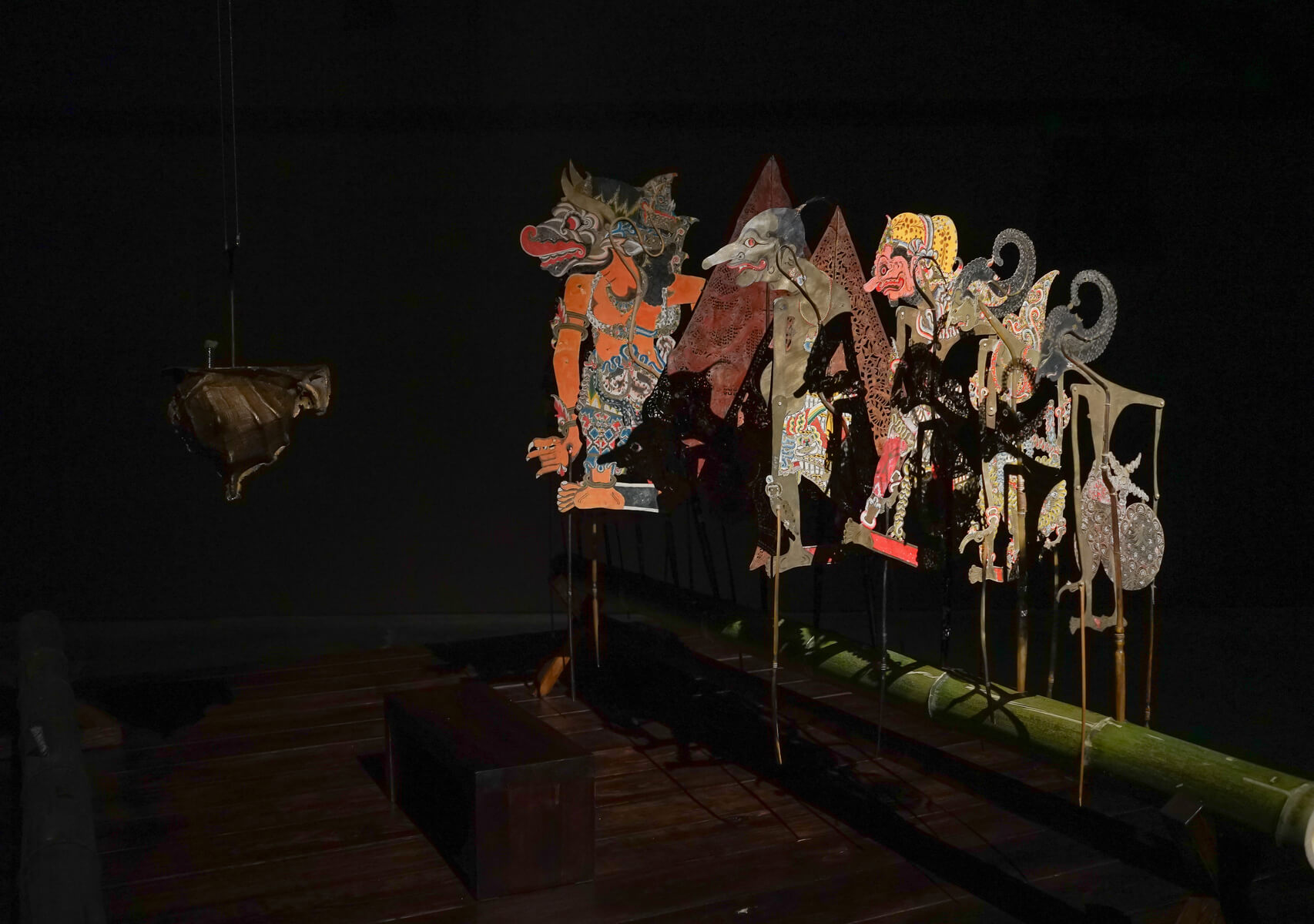 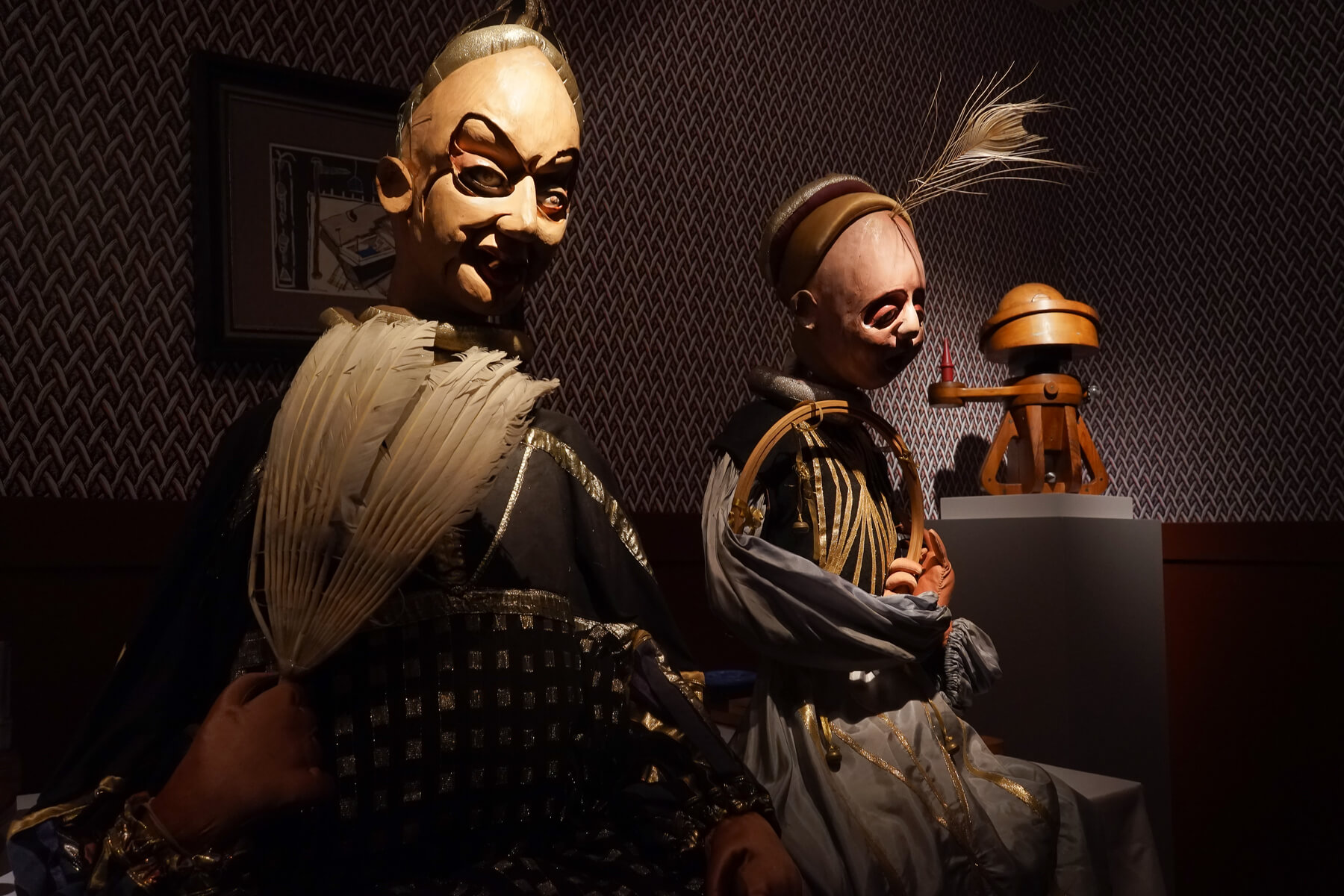 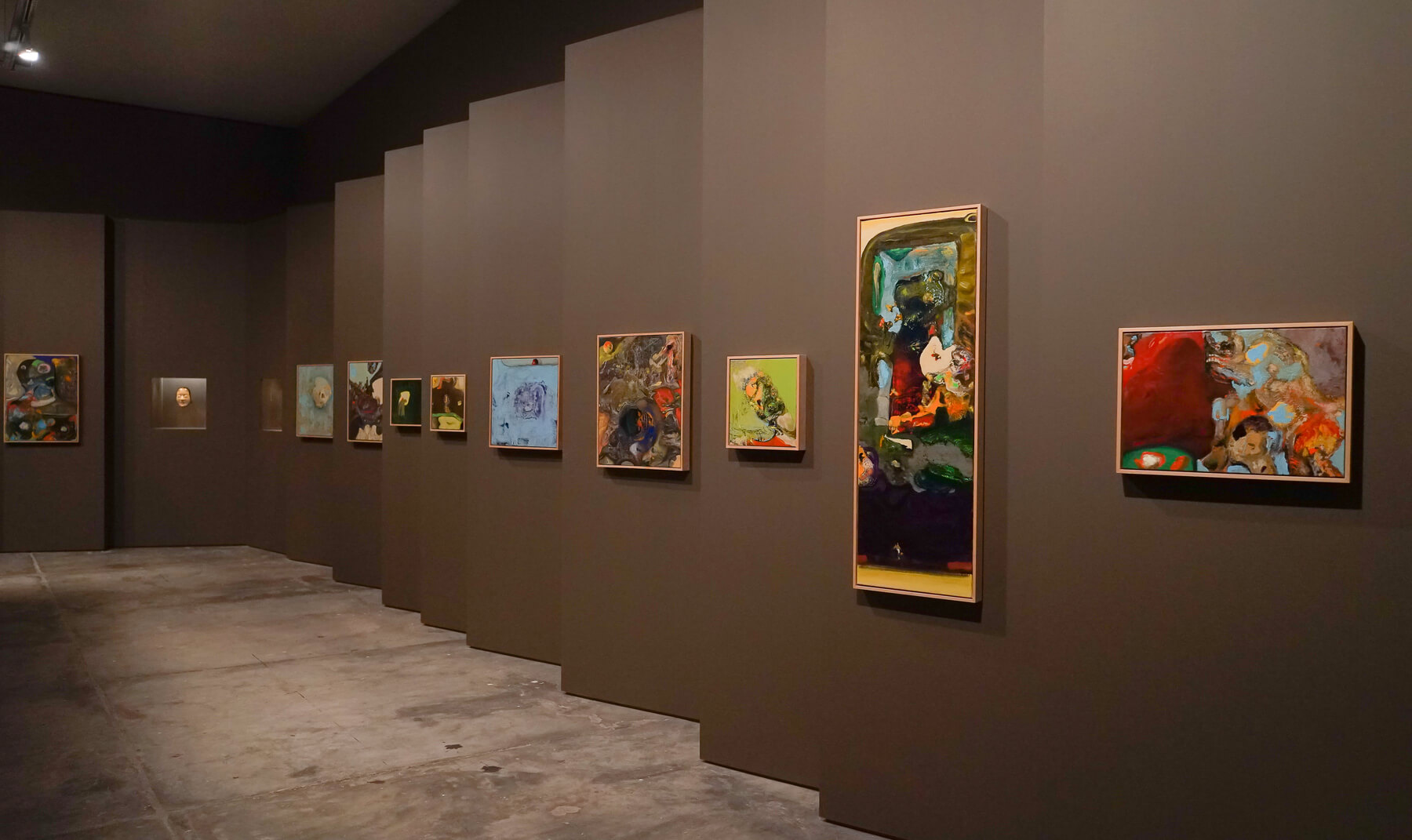 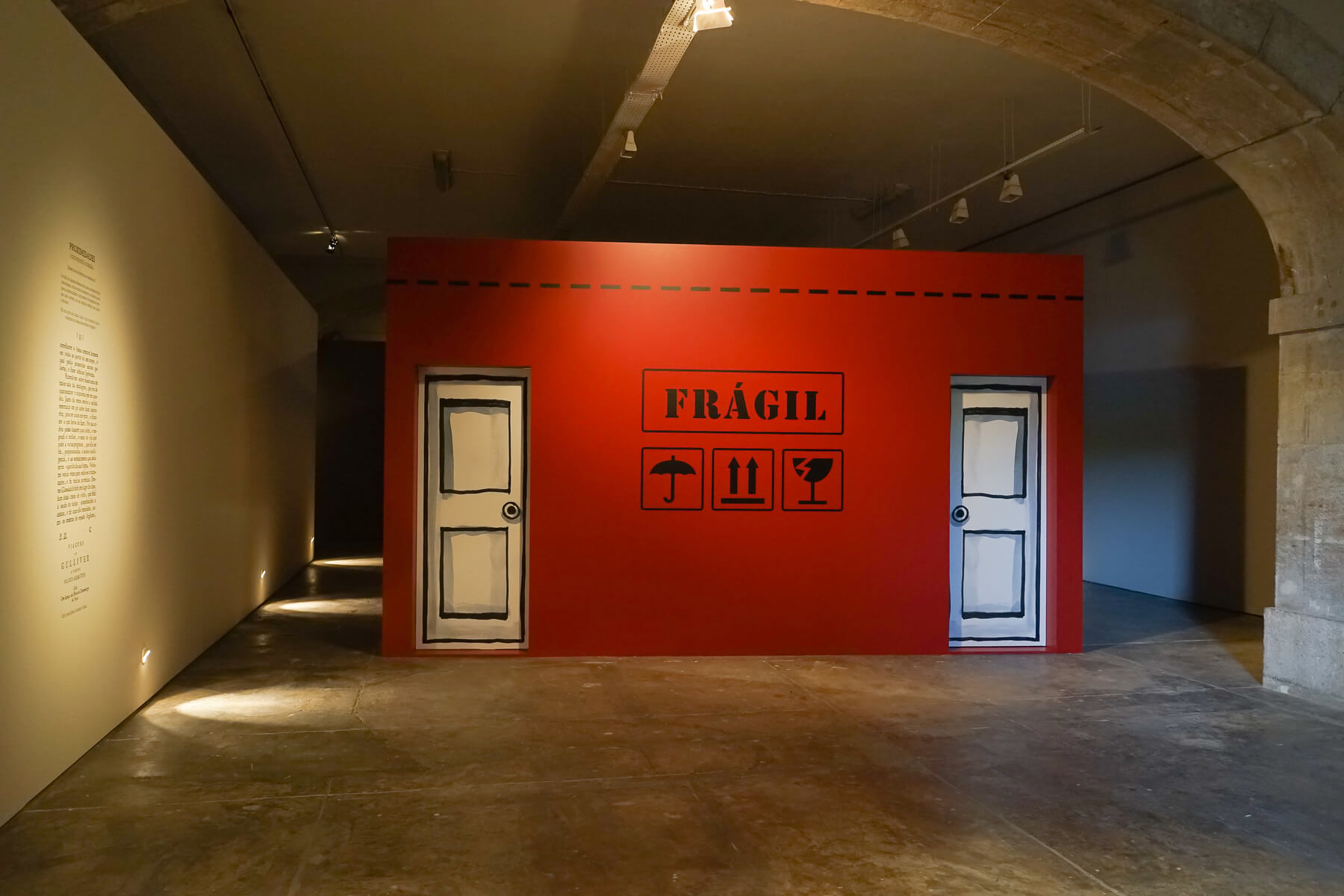