We wander between the towering and the bottomless.
Robert Smithson, A Cinematic Atopia, 1971

Underground Cinemas & Towering Radios gathers a set of works by means of which Ângela Ferreira (Mozambique, 1958) has been investigating, celebrating and problematizing the decolonizing and revolutionary utopias of the euphoric period of nation building in Mozambique, between the independence in 1975 and the beginning of the civil war in 1977. In line with the theories of Frantz Fanon, Amílcar Cabral and Samora Machel, Ferreira examines the role of culture, notably of cinema and radio, in the nation-building process and in the dynamics of internationalist collaboration, in a context of Cold War and of anti-apartheid struggle in South Africa. She pays homage to this historical moment by means of an investigative and archival practice undertaken through sculpture, video, sound, photography, serigraphy and drawing, in order to reveal images and sounds from this period, which often remain forgotten. Ferreira’s homages in the form of models and studies for monuments, usually including several versions, retain a quality of incompletion, openness, mobility and desire – even in the case of large installations, which have moved from the experimentation of drawings and maquettes towards the finish of the final sculpture. These archives and cartographies of revolution are monuments in (incomplete) revolution. The Mozambican post-independence utopia, its internationalist and grassroots communal efforts of decolonizing image production and distribution, and the impact of its (radio) waves on the anti-apartheid struggle return from their past futures to pose questions about (and to) the present.

Several voices from multiple times and places are joined in a polyphonic dialogue around the notions of utopia and revolution. The Russian constructivism of Model for Monument to the Third International (1920) by Vladimir Tatlin and of the mobile and multifunctional agitprop kiosks designed by Gustav Klucis on the fifth anniversary of the October revolution in 1922, as well as the cinematic atopias of the ‘underground’ cinemas for caves and abandoned mines designed by Robert Smithson in the 1970s are found in transit. They emerge in sculptural structures where we watch the birth of the political and cinematic utopias of the Mozambican revolution: the founding of the Instituto Nacional de Cinema (INC) and the production of the newsreels series Kuxa Kanema, exhibited across the country in mobile cinemas; the activities undertaken by the ‘political cameras’ (Political Cameras [For Mozambique Series], 2011) of the young filmmakers trained in the super 8 workshops which Jean Rouch, Jacques D’Arthuys and their team were invited to develop by the Eduardo Mondlane University (UEM) in 1976-1977; and the project for a new model of television – Nord contre Sud ou Naissance (de l’image) d’une nation (1977–1978) – presented by Jean-Luc Godard and Anne-Marie Miéville at the invitation of the Mozambican government, but subsequently rejected. Rouch and D’Arthuys’ Makwayela (1977), portraying the traditional dance of the Mozambican miners who had just returned from South Africa, and Mozambique (Hard Rain Concert, Fort Collins, Colorado, 1976), where Bob Dylan celebrates a Mozambican freedom of sun and sea, make up the soundtrack and the images which the small constructivist screen-tower of For Mozambique (Model No. 1 for screen‐tribune‐kiosk celebrating a post-independence utopia) (2009) ‘emits’ from within the gallery space. Their interchange evokes and problematizes different visions and experiences of revolution. Stone Free by Jimi Hendrix – another hedonistic hymn signaling the multiple and even contradictory meanings of revolution, liberation and freedom – appears readable instead of audible, as ‘underground’ concert for abandoned mine. Kaapse Sonnette/Cape Sonnets (Tamayo) (2014), the high radio tower outside – inspired by the one emitting in rural Mozambique, which can be seen in the archival images of Margarida Cardoso’s documentary Kuxa Kanema: O Nascimento do Cinema (The Birth of Cinema), 2003 – delivers a sound homage to the anti-apartheid poetry written in Afrikaans by Peter Blum (1925-1990).

Similarly to Manthia Diawara, who ‘inverted’, while paying homage to, the work of Jean Rouch – the ‘father’ of ethnographic film and cinéma verité – in his film Rouch in Reverse (1995), Ferreira presents ‘inverted homages’ not only to Rouch’s cinema (Studies for monuments to Jean Rouch’s Super 8 film workshop in Mozambique, 2011-2012), but also to the ethnographic and cinematic work which Jorge and Margot Dias, the so-called ‘father’ of Portuguese anthropology and his filmmaker wife, made in Mozambique (Studies for viewing cabinets for Margot and Jorge Dias, 2013; A Tendency to Forget, 2015).

Smithson’s cinema caverns and ‘underground’ projection booths inform the exhibited works in several ways. Parallel to Hendrix’s ‘stone free’ concerts in the abandoned mines of the Chislehurst Caves in London in the 1960s, the mining ‘underground’ in the South African context for British profit is examined through the history of the Cullinan diamond, found in South Africa in 1905 and included in the British Crown Jewels. The heterodox ‘underground’ of the filming and open-air screening in rural areas by the young Mozambican filmmakers and of the related initiatives aimed at a better use of natural resources, developed in farm silos on the UEM campus, outside the control of both Rouch and the Party orthodoxy, is also investigated. Finally, the clandestine and ‘underground’ nature of the confidential reports on anti-colonial activities, which Jorge Dias was sending to the Ministry of the Overseas, while developing his fieldwork in northern Mozambique, is revealed.

Just as Smithson’s cinematic atopias, Klucis’s drawings for agitprop kiosks, Tatlin’s Model, Godard and Miéville’s project and the activities of the super 8 filmmakers were not fully realized but continue to produce effects in the present, so Ferreira’s drawings for sculptures that were never built become open-ended spaces for possible futurities.

Underground Cinemas & Towering Radios evokes the memory of the liberation struggles against Portuguese colonialism and of the revolutionary and decolonizing utopias that followed – including the agency ascribed by them to cultural production – in a transnational and trans-historical perspective, without forgetting the contradictions and what remained unfulfilled. 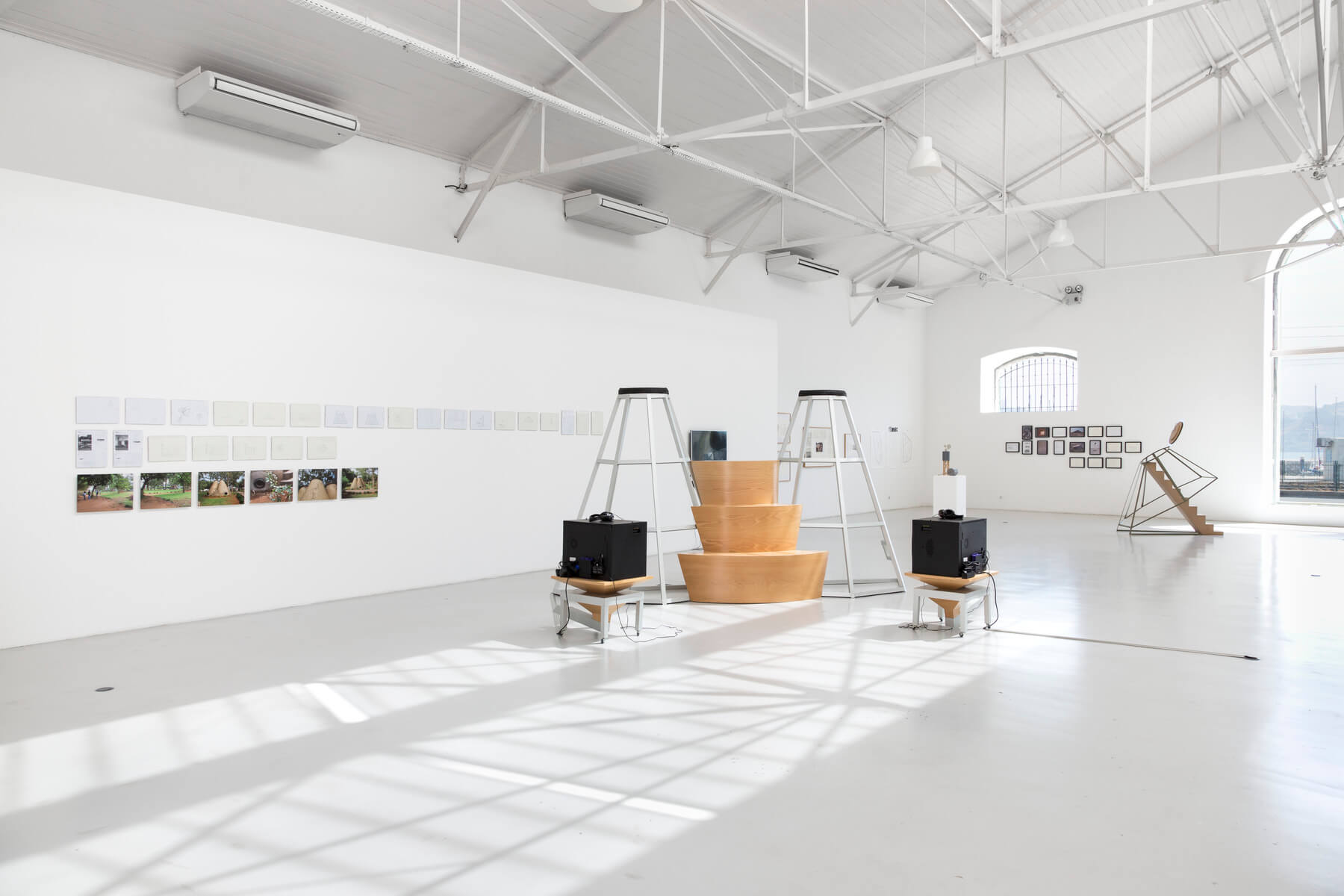 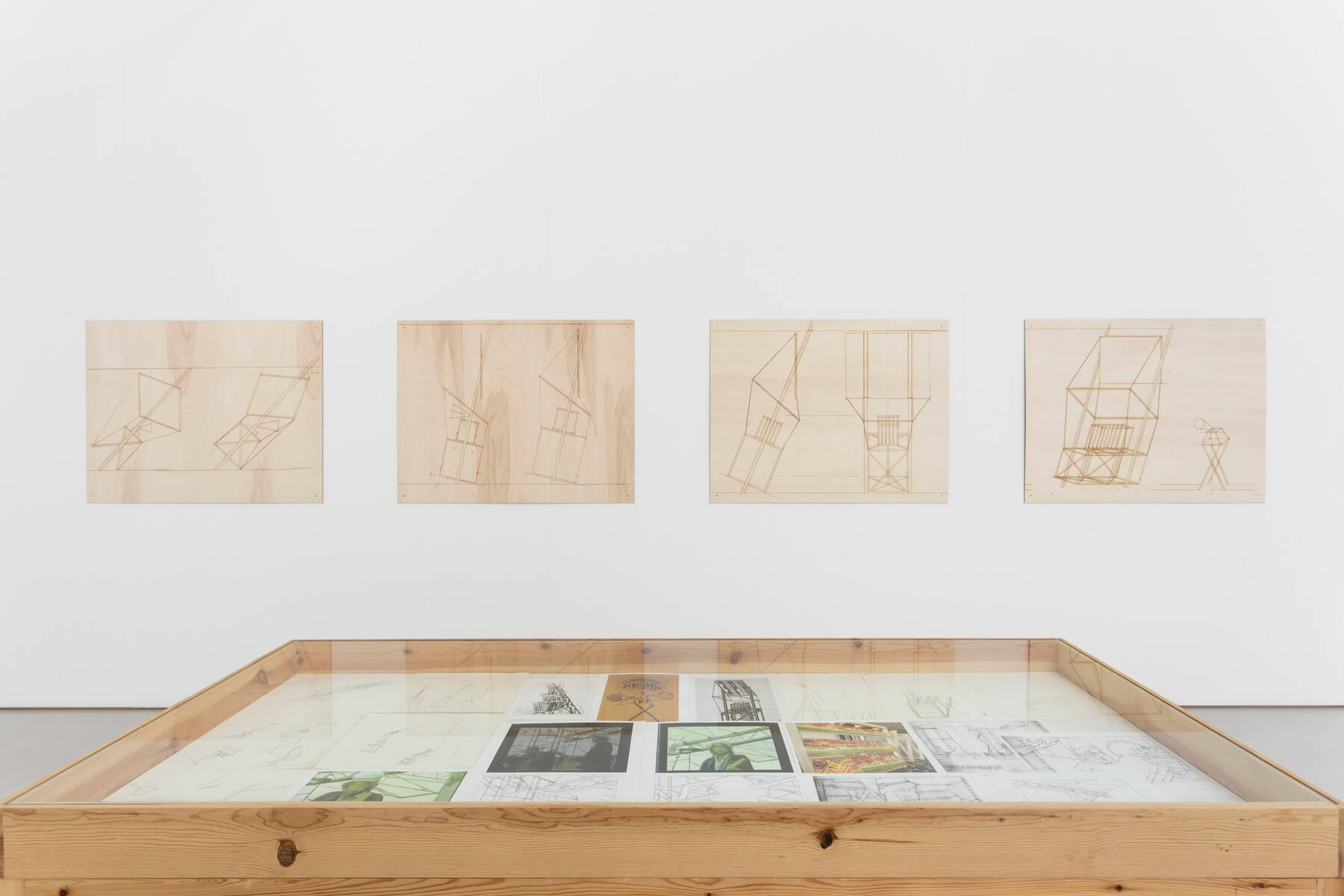 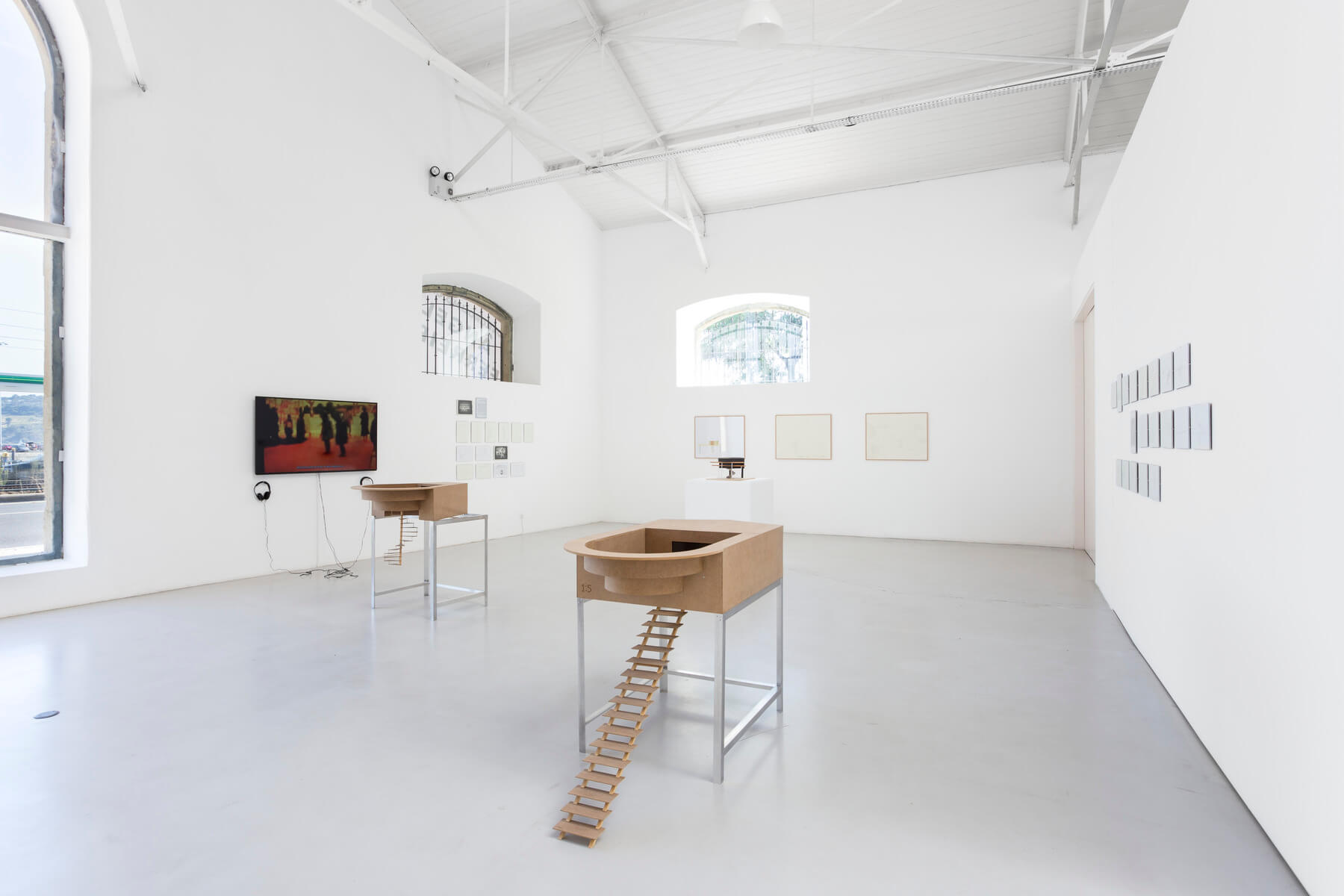 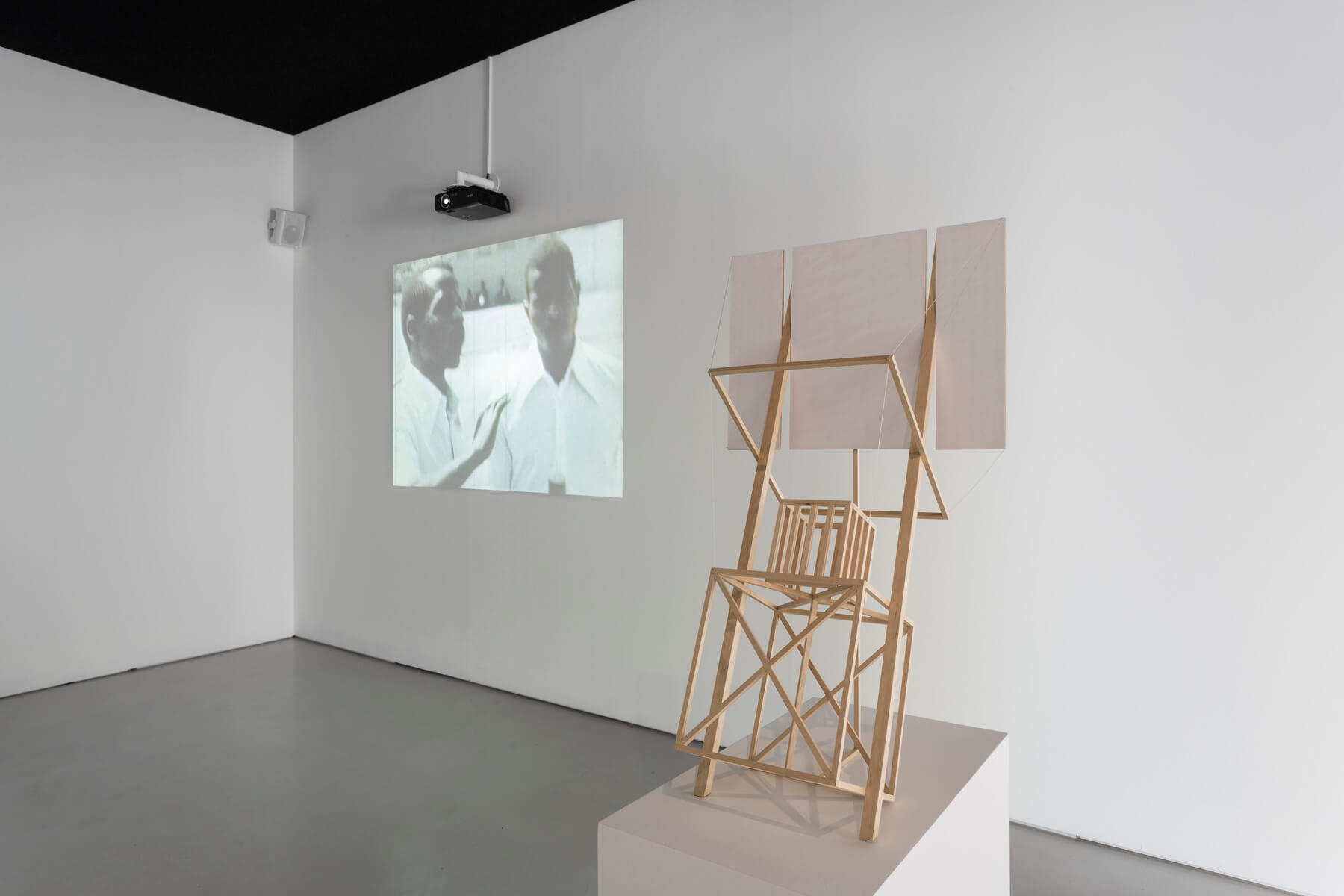