Crystals in the Sludge, Concept as Transformation 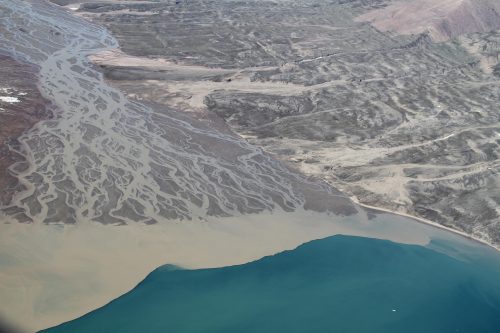 Ice and mud, crystal and sludge – antithetical at first glance, but entwined in each other, materially – and conceptually. Where does thinking mud through ice and ice in the mud go – perhaps into sites of extraction and into the mine, the dark mine of mud and silt, and its promise of something gleaming, bright diamond, value. Mines are sites of extraction – they can be open to the elements. They are the elements. The mine can be on the surface. The diamonds lie in the mud. The mud is crystal. To think the mud along with the crystal is holding in mind the contradiction that comprises reality. There is mud in the ice – from where? – in Caspar David Friedrich’s Sea of Ice, his polar picture, which suggested – in an axis oriented to the future – that the energies of our the age that would follow his painting, from the 1820s onwards, would be ones in which dominate the energies of flow and hold-up, of being bogged down in the mud, stuck, immobilised and of producing from that waste, that dirt, scintillating value. What would make the broken ship float again – escape the mud and frozen ice to carry the crystals of commodity value further around the world? Our epoch stands at the other end of this, 200 years on: what muds, what crystals, what stickiness, what concentrations of gleaming value are present for us and how would we recognise them?

Esther Leslie is Professor of Political Aesthetics at Birkbeck, University of London. Her interests lie in the poetics of science and imbrications of politics and technologies, with a particular focus on the work of Walter Benjamin and Theodor Adorno, as well as the poetics of science, European literary and visual modernism and avant gardes, animation, colour and madness. Current work focuses on turbid media and the aesthetics of turbulence. Her books include various studies and translations of Walter Benjamin, as well as “Hollywood Flatlands: Animation, Critical Theory and the Avant Garde” (Verso, 2002); “Synthetic Worlds: Nature, Art and the Chemical Industry” (Reaktion, 2005); “Derelicts: Thought Worms from the Wreckage” (Unkant, 2014), “Liquid Crystals: The Science and Art of a Fluid Form” (Reaktion, 2016) and “Deeper in the Pyramid” (with Melanie Jackson) (Banner Repeater, 2018) and, with Jackson, “The Inextinguishable”. (Limerick, 2021).