An afterthought on the “Collective Exhibition for a Single Body – The Private Score (Lisbon, 2021)” 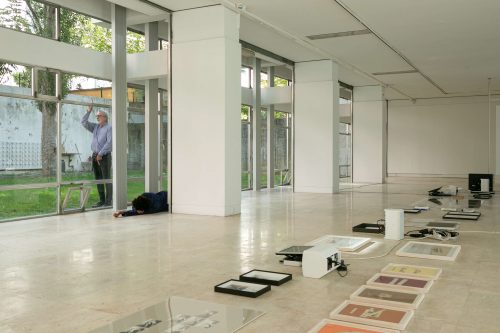 After its activation in Leuven (Belgium) and in Paris “Collective Exhibition for a Single Body – The Private Score” was on view from September 16 through October 24, 2021 at Galerias Municipais – Galeria Quadrum in Lisbon.

“Collective Exibition for a Single Body – The Private Score” was commissioned by the Kontakt Collection and co-produced by Tanzquartier Wien.

As institutions of contemporary art seek to diversify their programming and cut their carbon footprint, we have become increasingly aware of the opportunities that re-enactments and reinterpretations of historical actions by artists do carry, even if they were once conceived ephemerally. Albeit transient in their conception, the notion of agency has been particularly strong within the domain of performance art that can be enacted as a means of rupture of our everyday routines. In an era of Anthropocene, ideological turmoil, and a global pandemic, we are forcibly aware that our actions are not merely bound by personal and/or aesthetic considerations. Working from within a public institution such as the Galerias Municipais of Lisbon, it would be a sign of ignorance to believe that our platform, for lack of a better word, exists in a void. Thus, this short text is not merely trying to introduce the Lisbon iteration of “Collective Exhibition for a Single Body – The Private Score” but it is also an attempt of connecting this project to the local context as well as Galerias Municipais’ program in general and the subsequent exhibition celebrating the centenary of Portuguese artist, filmmaker, art critic and curator Ernesto de Sousa in particular (“Ernesto de Sousa, Exercises of Poetic Communication with Other Aesthetic Operators”, November 27, 2021–February 27, 2022).

What does it mean to present documentation of ephemeral acts that were carried out in geographical distance of thousands of kilometres on the other side of Europe and a historical distance of up to 50 years or more? Why is it important to confront performers and audiences alike with the gestures of Július Koller, Jiří Kovanda, Sanja Iveković, Valie Export or Mladen Stilinović and others here in Portugal today? There are myriad rationales at work. First there has been a socio-political analogy between the two geographical regions that has been absent from a historical reappraisal as well as programming in local institutions. If Portugal was governed by the dictatorship of Estado Novo through 1974 and until the Carnation Revolution brought down a fascist regime, the climate of oppression was felt during the years of the Cold War in the former Eastern Bloc until the beginning of the fall of the Iron Curtain in 1989. In both regions, the regime censored press and mounted a repression apparatus that limited freedom of movement and speech in public space.

Portuguese artist, writer, filmmaker and curator Ernesto de Sousa introduced the advent of performative and process-based practice with the organization of the 1st meeting of the Oficina Experimental and the subsequent Guincho meeting and picnic at Rinchoa in 1969. The program included the transportation of an object by Noronha da Costa to Guincho beach, its destruction by shooting and the registration of these actions for a film.[1] The advent of conceptual art practice that could create an interference with the status quo was further amplified upon his return to Lisbon with a set of slides and the catalogue of Harald Szeemann’s documenta 5, in 1972, which he presented to his peers. The same year Ernesto de Sousa organized the exhibition “Do Vazio à Pró Vocação” (From Emptiness to Pro-Vocation) as part of Expo AICA 72 at the Sociedade Nacional de Belas Artes and two years later “Projectos-Ideias” (Project-Ideas) at the same venue. It would take him another three years to arrange for “Alternativa Zero” (The Zero Alternative, 1977) to take place at the Galeria Nacional de Arte Moderna in Belém, considered by many as the first convention of conceptual practice in the aftermath of the April 1974 revolution and for which Ernesto de Sousa introduced the umbrella name of “aesthetic operator”. In his invitation letter to aesthetic operators he stated that “le public sera l’auteur réel” (the audience will be the real author) adding with a stamp that “All Your Mail And Documentatio[n] Will Be Exhibited A”.[2] Thus one could presume that perhaps other subversive actions could have predominated artistic practices at the time. Yet, if mail art was vital in transcending borders in South America or Eastern Europe during the second half of the twentieth century, the tradition would only occasionally surface during the 1970s and 1980s in Portugal. The organization of exhibitions was making the way for avant-garde art to be produced and placed in social relation with its viewers in Portugal.

The contact with Eastern European neighbours has historically been rather sporadic. Artists from Eastern Europe are rarely exhibited in museums or private galleries in Portugal. Within the cultural sphere, the twinned cities Lisbon and Budapest have been organizing an artistic exchange program (exhibitions by Portuguese artists returning from Budapest took place at Galerias Municipais – Galeria Quadrum between 2013 and 2016, and were accompanied by a publication). Contemporary Art projects introducing the legacy of artistic production from Eastern Europe are of utmost importance here, as they provide the public—otherwise prone to misbeliefs—with an understanding of socio-political realities that otherwise remain rather distant. Since the 1990s workers from Eastern Europe and East Asia have been offering their services in areas such as construction and agriculture, and often are experiencing exploitative working conditions. Or worse. When the Ukrainian Mr. Homeniuk arrived at Lisbon’s Humberto Delgado Airport in March 2020, the country’s immigration officials tortured the man to death, consequently leading to their jailing and parliament voting the breakup of the Portuguese Borders and Immigration Service (SEF).

The subject of forced migration has also been addressed in the performative score arranged by Pierre Bal-Blanc for the “Collective Exhibition for a Single Body – The Private Score (Lisbon 2021)” at Galerias Municipais. Anna Jermolaewa’s film Research for Sleeping Positions (2006) refers to the Vienna main train station as the entrance hub for migrants from Eastern and Central Europe. Without a place to go, a simple bench provides minimal comfort upon arrival. The strain of dislocation and the sacrifices and humiliations suffered during migration come to the fore in Artur Zmijeswki’s silent film Glimpse / Spojrzenie (2016–17) for which the artist has visited and portrayed migrants from the African continent in makeshift camps in Paris and Calais. Can the encounter with the distressed here sensibilise the viewer for humane, understanding, and gentle encounters? While I sit writing in my office, media reports that migrants at the Poland–Belarus border have been denied access to water by police patrol.[3]

I hear Mozart’s Requiem in D minor, KV. 626, from the soundtrack of Pierre Bal-Blanc’s video Collective Exhibition for a Single Body – The Private Score (2019)—recorded at the Haus Wittgenstein in Vienna—spilling over from the nearby gallery. Its melody is only overturned by the noise of planes taking off from the nearby airport. When stepping out from the office, I can see Jack Hauser, Luiza da Silva Gabriel, João dos Santos Martins or Adriano Vicente performing gestures from the exhibition score’s repertoire (“repertoire” here refers to the different performances that composed the Private Score, all represented via art works in the exhibition, too). Július Koller’s Horizontal Man (U.F.O.), South Bohemian Mimesis (1981) stands out. Koller began to use the U.F.O. letters in 1970 to describe the “cultural situations”: “Koller originally used the initials to mean ‘Universal-Cultural Futurological Operations’, but created many variations: the ‘U’ has stood for ‘universal’ or ‘universal-cultural’; the ‘F’ has become ‘futurological’, ‘fantastic’, ‘functional’ or ‘fictional’; and the ‘O’ has stood for ‘object’, ‘question mark’ (‘otaznik’ in Slovak) or ‘revival’ (‘ozivenie’ in Slovak).”[4] The performer stands straight, pointing one hand to the floor the other to the sky, thus simultaneously questioning the status quo of the site s/he is standing on and the potential of the surrounding universe. Stano Filko’s HAPPSOC IV, Travel in Space (1967) sees the performer recreating a rocket posture in a corner between office building and garden wall within the Coruchéus complex, as if s/he was to take off any second into another universe. I am overwhelmed by the notion of transit articulated at once, via artworks in the gallery display, the performances, and the digital news media on my computer screen.

Stemming from the historical context of the former Socialist states in Europe, the performances re-enacted in Lisbon signal—among other issues—towards movement between territories and the policing of public space. Their re-enactments were initially planned to take place on a downtown Lisbon street, Rua do Poço dos Negros. Transferred to the gallery vicinity due to Covid-19 regulations, the performances face the gallery public, as well as the other users of the Modernist Coruchéus complex such as artists on their way to studios, alongside those frequenting the open-air café kiosk or the public library.[5] If Bal-Blanc initially decided to site the performances for “Collective Exhibition for a Single Body – The Private Score (Lisbon 2021)” on Rua do Poço dos Negros, he did so because he planned to refer to the area as graveyard for slave victims in the era of 16th century pandemics and thus contribute to a decolonizing narrative at stake. The gallery visitor now was confronted with a set of gestures articulating rupture and the pausing of everyday routines in close analogy with the documentation of the original performances displayed inside Quadrum gallery. The exhibition was thus also evoking sensations of isolation, political supervision but also the history of Portuguese colonial expansion on the one hand and, finally, migration (not an alien subject to the Portuguese people either, who emigrated to France, or the United States, and elsewhere for different reasons including political exile, the colonial war, low levels of economic prosperity or severe financial crises). Thus Bal-Blanc’s project once again affirmed that curating is not purely a formal undertaking, or one that takes place in a vacuum. The choice of venue and the enunciation of the collective exhibition, amplified through a sequence of performative re-enactments at this venue, triggered manifold references connected to global migration.

If we are to pay homage to Ernesto de Sousa on his centenary at Galeria Quadrum following The Private Score, then we will also be revisiting his often-collaborative work through the lens of a generation of younger artists. Ernesto’s vanguard practice and the one of his peers often resonated in the architecture of Galeria Quadrum. It opened ways for Portuguese art to communicate internationally, such as the programming of Quadrum did under the auspices of its founder Dulce d’Agro and continues to do so into the present. The art on view here testifies a desire for discovery, strives to do so peacefully, respectfully and beyond the limits of man-made borders or the limits of communication.

Tobi Maier is the director of the Municipal Galleries in Lisbon.

[3] A few weeks later, on November 24, 27 migrants drown during a shipwreck tragedy after having departed Calais for the UK.

[5] The Coruchéus complex’s architecture stems from the final years of the Estado Novo. Designed by Fernando Peres Guimarães, the facilities inaugurated in 1971 (Galeria Quadrum opened two years later, on the ground floor space originally conceived as a cafeteria). The public library functions in the Coruchéus Palace, a building that dates back to the 18th century. 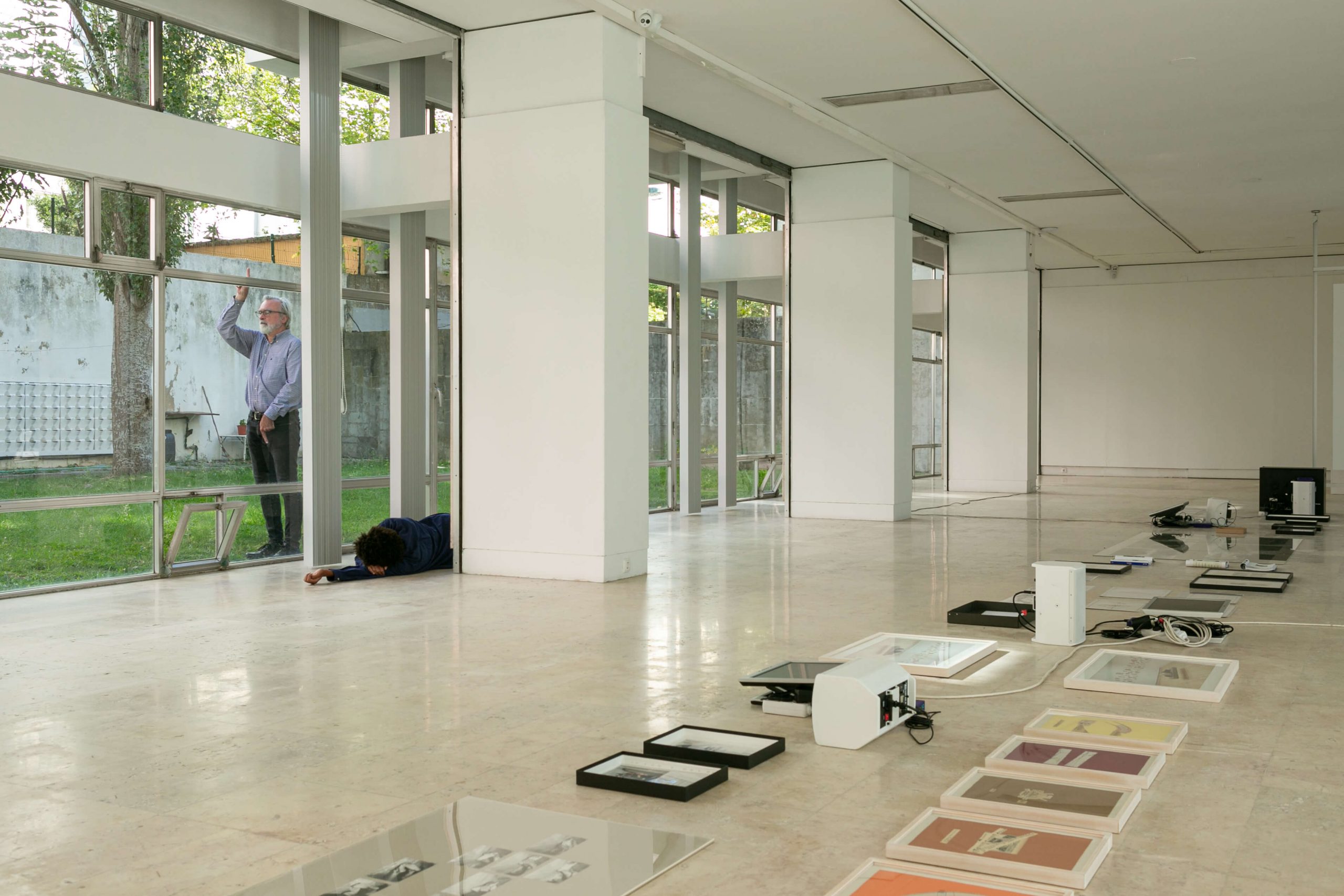